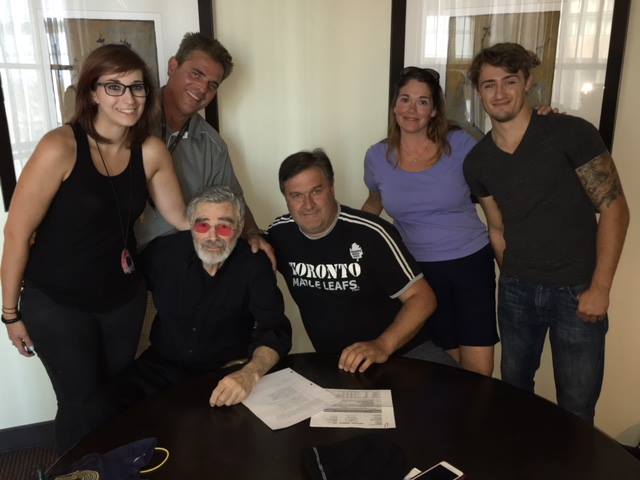 The death of actor Burt Reynolds has hit Unionville film maker Stephen Wallis particularly hard because he had worked with the Hollywood legend last summer in what has become his last movie.

Defining Moments, which is scheduled to be released in April, was filmed primarily in Unionville, although some of it was done in Markham. Wallis wrote, directed and produced the film.

Reynolds, who died on Sept. 6, at age 82, was one of several actors in the film which Wallis compared to Love Actually, because it had multiple lead actors, although not all of them are in the same scenes. When Jerry Lewis became ill, Wallis reached out to Reynolds, who had one of the big roles in the movie, which took about a month to do.

Wallis found out about Reynolds’ death while in Ireland filming his latest movie, The Martini Shot.

“Burt was always my hero,” Wallis said. “I had two guys I loved in films and television, Burt Reynolds and John Cleese.”

Cleese is part of the cast of The Martini Shot.

“I decided when we lost Jerry I should go after Burt and see what happens,” Wallis said. “Unbelievingly he loved the script of Defining Moments. He said it was one of the best scripts he’d ever read. He liked it because it was funny, poignant and about relationships.

“The last time I had talked to him he wanted to finish his career doing a western. I was working on a script for that, although I haven’t completed it yet.”

Wallis had tremendous praise for Reynolds as an actor and person.

“Burt had this charisma both on camera and in real life that just doesn’t exist anymore,” Wallis said. “He was a star in every sense of the word. He shone so brightly, his sweetness always coming through. He was everything you hoped he would be, but even then he still always surprised you, daily, with more. “One of the things that happened on Defining Moments, which I don’t talk about much, was that each day Burt would have his assistant go out and take behind the scenes pics with Burt and our team. And somehow through the night, they’d print off those pics and he’d sign them and give them to people the next day. Such a wonderful and thoughtful gesture that he didn’t have to do. I know that mine is one of my great treasures. He asked me to come down to visit him in Florida a while back, but we were busy with other things.

“I’m sad that I was not able to go down one last time and see my friend and creative partner, but I do have our movie. It’s a good one and he’s good in it.”

The CBC and BBC broke the news of Reynolds’ death to Wallis while he was busy in his film.

“I realized that I was asked to comment on something I only knew minutes before and had to try to be coherent in giving praise to the man,” Wallis said. “I didn’t know that we were his last movie. I know that he was excited about doing the new Quentin Tarantino movie (he was scheduled to do), but I didn’t realize that he hadn’t shot his scenes yet.”

Wallis said, in many ways, it was an honour that his film was Reynolds’ final one of his career.

“He told me afterwards that (Defining Moments) was one of his three favourites (after Deliverance and Smokey and the Bandit). I hope that we made him proud,” Wallis said. “I will always remember coming to Unionville to shoot a movie in my home town with my hero. I wouldn’t trade those memories for anything in the world.”

Photo: Unionville filmmaker Stephen Wallis (wearing the Toronto Maple Leaf shirt) is pictured with actor Burt Reynolds (seated beside him) and others during the filming of Defining Moments.