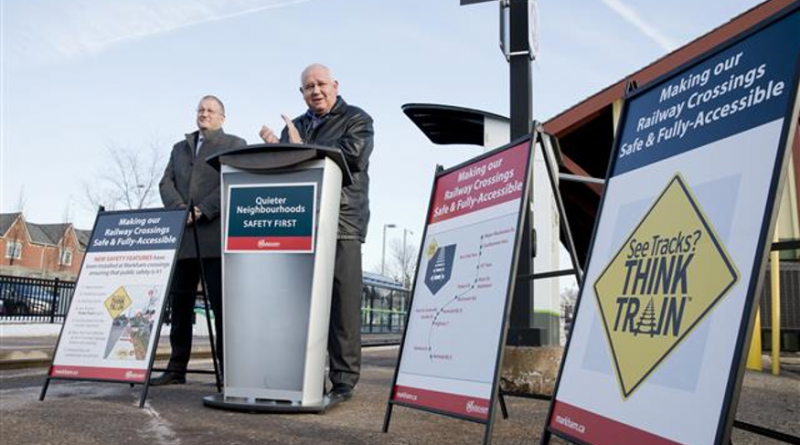 Residents who have described GO Train horns as ‘unbearable’ and ‘excruciatingly loud’ can finally enjoy the sound of silence and bid farewell to unwanted wakeup calls.

The City of Markham has announced the end of mandatory train whistling at 13 Markham rail crossings from Steeles Avenue to Major Mackenzie Drive East. In total, the whistle cessation program announced in partnership with Metrolinx and the Region of York will silence more than 1,600 train whistles per day.

“This is a complex, multi-jurisdictional project where we had to adhere to changes in federal regulations and we are now proud to be one of the first municipalities in the Greater Toronto Area to silence train horns under the new federal regulations,” Mayor Frank Scarpitti says.

His “personal commitment” to the project dates to 2008, when council commissioned a whistle cessation feasibility study, he notes.

The announcement comes as Metrolinx expands service along the Stouffville corridor to provide all-day GO service. The blowing of a train whistle is a safety measure mandated by Transport Canada at crossings where there isn’t infrastructure like train arms to alert drivers and pedestrians of a coming train.

To eliminate train whistling, Markham implemented a host of mandatory upgrades as well as additional safety measures to 13 existing rail crossings, each of which is now equipped with either maze barriers or pedestrian warning gates as well as tactile walking plates, visual signage and bells in order to meet Metrolinx’s safety requirements.

Those fully-accessible pedestrian warning systems advise pedestrians, motorists and cyclists of approaching trains and assist in keeping them safe.

The City of Markham and York Region shared the cost of the $6-million whistle cessation project.