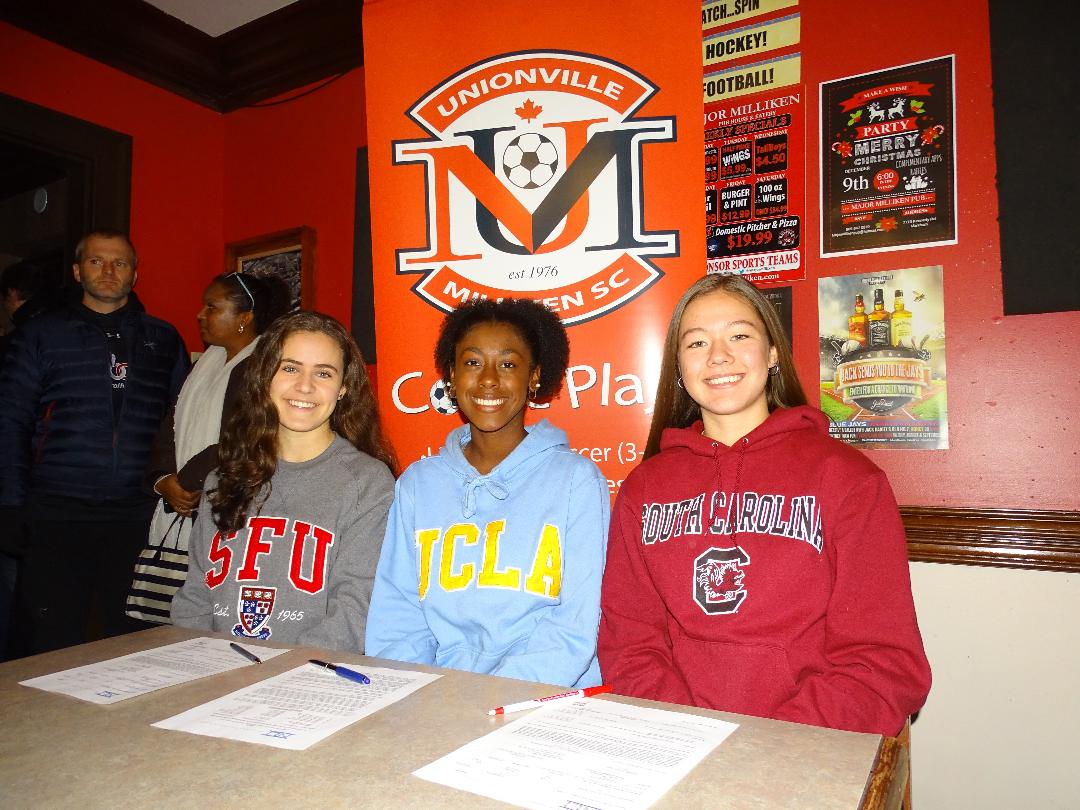 Alex Morales has helped many young soccer players as a coach over the years, but none have earned his respect like Samantha Chang and Shana Flynn.

The Unionville-Milliken Soccer Club (UMSC) women’s coach is hardly surprised his two biggest teenage stars landed scholarship offers to top NCAA Division 1 schools, with Chang set to attend the University of South Carolina and Flynn off to the University of California, Los Angeles (UCLA). While both universities are among the top four women’s soccer programs in the United States, Morales believes both schools should be thrilled they are getting not only two great players, but two special teenagers.

“The schools are very lucky,” he said. “They’re both schools that went to the final four, so they would only recruit the best of the best. These girls were recruited by so many top schools. I’m really sad to see them go, but they deserve everything they get.”

For Morales, the goal has always been, from the time he started coaching the girls at a young age, to help them get a great education, free if possible and just be the best they can be.

For UMSC, it’s a continuation of a long tradition of helping players land soccer scholarships. Three players from the Women’s League 1 Ontario club will kick off their NCAA careers this season.

Along with Chang and Flynn, Kayla Goncalves will be attending Simon Fraser University in British Columbia on a soccer scholarship. The fullback joins a program from the only university in Canada offering student-athletes an NCAA athletic experience.

The UMSC captain and central midfielder, Chang said the whole process of picking among the interested schools was special for her and her family. When it came time to make a decision, she had little doubt the University of South Carolina was for her.

“For me it was the family atmosphere that I felt when I was down there visiting (in 2015),” said the 17-year-old Mississauga native, who still isn’t sure what she wants to study and is going into university undeclared. “The coaching staff, Shelley Smith and Jamie Smith, they’re a husband and wife duo, so that kind of set the tone of the family atmosphere. The girls themselves are just so close and a family is the exact word I would use to describe it. Team cohesiveness is really important to me.”

A field general in every sense on the soccer field, Chang was the UMSC captain despite being only 16 for part of the season on a team with players as old as 24 or 25 and who had already played NCAA Division 1 soccer.

“My favourite player that I’ve ever coached,” Morales said of Chang. “She’s a natural born leader. She’s dedicated, committed. Always puts everyone else’s best interests ahead of hers.”

A player with unbelievable energy and outstanding character, Morales believes if Chang was told she couldn’t play soccer again, she would still be tremendously successful in whatever she does.

While some players are really good on one side of the ball but have deficiencies on other, Chang excels on both offence and defence.

“She’s a complete hybrid, two-way player,” he boasted. “She’s played centreback for the U-17 Canadian National team at the World Cup. She’s played creative midfielder for me. She’s a box-to-box midfielder. She can play anywhere on the field and she’s got an extremely high soccer IQ and that really helps on the field and as a leader as well.”

Flynn is one of less than a handful of Canadian girls to ever earn a soccer scholarship to UCLA, Morales said. Like Chang, it’s clear what stands out with his young forward.

“Above everything else, it’s their character,” he said. “Their character allows them to prioritize things when they were 15, 16-, 17 years old that other kids wouldn’t.”

It was only a little more than a year ago that Flynn tore her anterior cruciate ligament (ACL). She was out for 12 months, but didn’t miss a beat when she returned to the field.

“She just played for Canada at the U-20 World Cup qualifying and scored a hat trick against Haiti,” Morales said. “She has incredible foot work. She is second to none. She has incredible pace. A really, really fast, athletic kid.”

“She’s ahead of the curve in terms of her talent,” Morales said. “Her talent is second to none, but talent alone doesn’t get it done. She’s an extremely hard worker.”

Flynn is a phenomenal student as well. She has more than a 90 per cent average and was also accepted into Harvard University.

“She is a mix of somebody who has all the natural ability that you want, but she doesn’t stop there,” Morales said. “She works hard, she’s dedicated and is also a leader on the field.”

Flynn visited UCLA last April for the first time and when she returned, after discussing it at home and with her coaches knew she had found her school. She returned to UCLA in December with her mom.

“Originally it was the coaching staff,” the 17-year-old said of what made her decide on UCLA over numerous other scholarship offers. “When I went to visit I felt a connection to the coaches there.”

UCLA advanced all the way to the NCAA Division 1 tournament finals before falling 3-2 to Stanford in the championship game.

Flynn and Chang are great friends and having someone that close to be able to go through this whole process together made things much easier.

“I’ve actually known Sam since I was seven,” Flynn said. “The whole journey, it’s been good to have her by my side. Obviously this has been a goal of both of ours a long, so just getting to this point now means a lot. Especially with her.”

Goncalves has only been with UMSC for a year, but she’s added a great deal to the team.

“She’s a hard working kid. Never misses practice,” Morales said. “She gave everything she had. I’m really happy that she will be moving on to play NCAA soccer as well.”

Moving away from home will bring lots of exciting challenges, but Chang is excited about what lies ahead.

“I know my parents are only ever a phone call away if I ever miss them,” she said.

Flynn is finishing high school a semester early and the Brampton native is heading down in March for the spring quarter. California isn’t a bad place to be when the temperatures are still chilly up here.

“Not at all. Nope,” Flynn said before adding a chuckle.