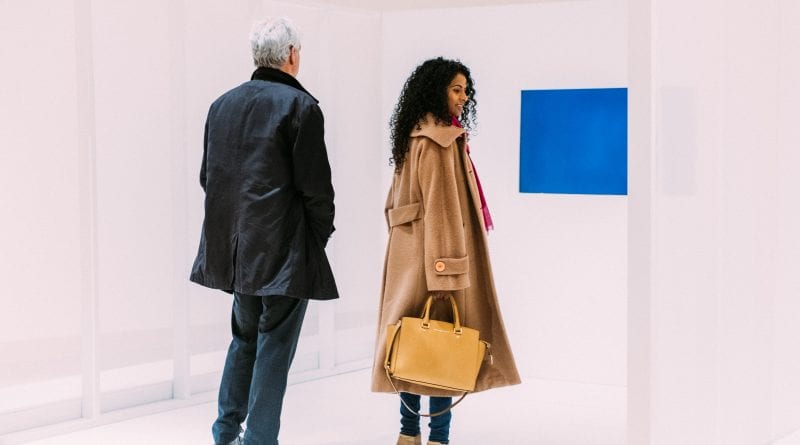 The gallery launched their winter exhibitions, Moving through darkness into the clearing, and Chris Kline and Yam Lau: Weave, with an opening reception.

“An important part of the Gallery’s mandate is not just to research and display the art of F.H. Varley” says Varley Art Gallery Director Niamh O’Laoghaire, “but to keep it relevant to new audiences. A key way of doing that is to place works by Varley and his peers in conversation with contemporary objects. Curator Anik Glaude has done an excellent job of this by pairing Greg Staats with the Group of Seven in the exhibition Moving through darkness into the clearing.”

Moving Through Darkness into the Clearing, on view until April 7, explores the ways in which artists return to the land in search of subject matter and how these repetitive actions are informed by their understanding of place and identity.

Inspired by a new acquisition, Gothic Arches at Doon, by F.H. Varley, circa 1948-1949, trees are a common subject and motif in works by the Group of Seven. Landscape paintings by A. J. Casson, F. H. Johnston, Arthur Lismer, Franklin Carmichael and Varley are united to consider the different ways in which trees are depicted in painted form.

Also included are photographic works by Greg Staats, an Indigenous artist, who both complements and challenges the Group of Seven’s work on display. Staats has been exhibited throughout North America, has received the Duke and Duchess of York Prize in photography and served as a faculty member for two Aboriginal visual arts residencies at the Banff Centre for the Arts.

Chris Kline and Yam Lau: Weave, on view until April 29, is a two-person exhibition that reflects precise involvement in the fields of force of materials. The unusual pairing finds surprising affinities.

Kline’s hand-coloured paintings contrast with Lau’s gliding cinematic movements through simulated space, but both artists are intimately involved with the entanglement of idea and substance, being and becoming, memory and form, especially as woven through or across screens.

We generally understand two sorts of screens in our daily encounters: the ones that work by opacity to block something out and the other that give us a window into the visual world. As they appear in these works, screens shift between withholding and revealing, layering and disclosing unfolding intricacies.

Weave will be accompanied by a free performance with artist Yam Lau on March 9, from 1:30 p.m. to 4 p.m to rethink new expressions and qualities of space, time, and image.

Weave is organized and circulated by the Agnes Etherington Art Centre at Queen’s University.