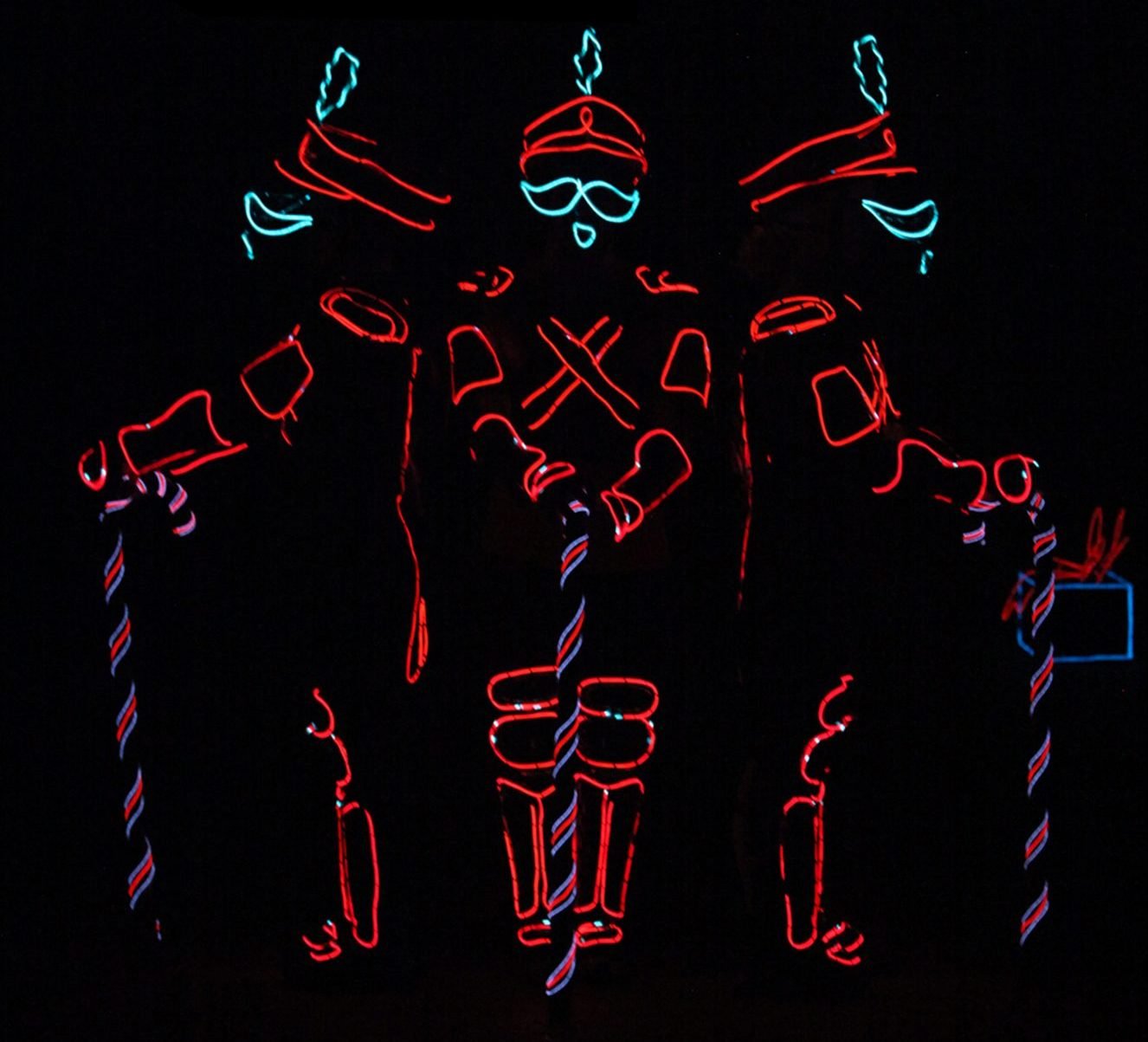 It may be the only production that is better with the stage lights off than on. The New Orleans-based Lightwire Theater is bringing its acclaimed A Very Electric Christmas show to the Flato Markham Theatre for two performances on Dec. 8.

The show is unlike any other Christmas performance you’ll see, mainly because the performers are in the dark for the entire show.

The characters, props and set itself are illuminated only by hundreds of electroluminescent (EL) lights that line them. The story is told through the lights and the characters’ movements. Think of the effect of someone waving a glowstick in a dark room and multiply that by a cast of six with multiple lights in every colour and all manner of patterns. Then, add some dancing into the mix.

It’s a daunting undertaking, but one that makes for a dazzling spectacle befitting the Christmas season, says Blanco, who also plays several characters in the show.

“Because it’s a Christmas themed show, we’re able to do some fun things like magical transformations or teleportations,” she says. “With whatever we want to implement in the show, it feels like, with Christmas, everything’s possible.”

The story is inspired by the Nutcracker, Blanco says, featuring a baby bird who gets sidelined by a snowstorm while attempting to migrate south with his parents, ending up stranded at the North Pole. As he tries to navigate his surroundings, he encounters delightfully welcoming Yule-time characters like dancing poinsettias and Nutcracker soldiers, but also some villainous ones.

The cast members are not illuminated by the lights; rather the lights themselves make the contours needed for the audience to see what’s happening. To create these effects, performers wear outfits fashioned out everything from backpacks and used election signs to skateboard wheels and PVC pipe.

Blanco says people who watch the cast rehearse with the lights on are always amused to see how unpolished things look compared to the finished product. The key for that is complete darkness. Even the subtle illumination of the lights that line the theatre’s aisles or a door opening to a lit hallway can hinder the effects of the performance.

For the performers, who double as the crew, must manage controlling the lighting at the same time as focusing on their movements and choreography. Remember, they’re in the dark as well.

“We see more than you do because we’re, of course, on the same level as the other performers, but we choreograph every moment of the show,” Blanco says. “What you’re seeing lit up on stage is only about half of what we’ve choreographed. Because we all know where everyone is supposed to be when they’re on stage, as well as when they’re off stage.”

Despite the challenges with a show so heavily focused on electronics, the result is one with universal appeal, she says.

“Instead of using traditional ballet or song or words to tell the story, our characters are how we tell the story. You’re used to seeing human reaction and human emotion expressed on faces. We’re very limited in that realm because we’re doing our show in the dark, so it’s about how you move your body and how you move the puppet. Because of that, we can perform Lightwire shows for anyone from one year old to 99 years old and up. It just translates to everyone, even those who don’t speak our language.”