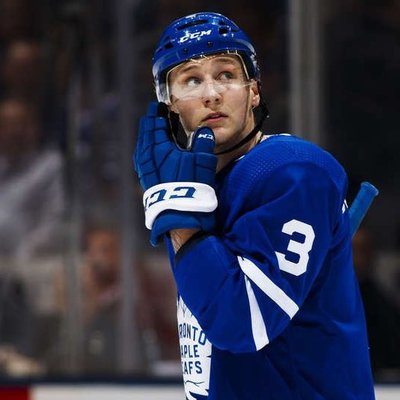 Travis Dermott is making quite an impression for the Toronto Maple Leafs.

The 21-year-old defenceman from Newmarket scored his first National Hockey League goal on Jan. 31 in a 5-0 victory over the New York Islanders at the Air Canada Centre. He also added an assist on a goal by fellow rookie defenceman Justin Holl, who was playing in his first NHL game.

Dermott tipped in a pass from forward William Nylander to score on a play in which he had possession of the puck in the offensive zone, lost control of it and then stripped it from an Islander player. Dermott was paired with Holl and showed tremendous composure.

Dermott has played in nine games since he was recalled from the Leafs’ American Hockey League farm team, the Toronto Marlies, and has a goal and two assists. Dermott was drafted 34th overall by the Leafs in 2015 from the Erie Otters of the Ontario Hockey League. He played three seasons for the Otters. He played 59 games for the Marlies in 2016-17.

He was summoned to the Leafs because of some injuries and has filled in well, showing offensive skill and a physical presence with a highlight-reel check. He recorded an assist in his first game on a beautiful stretch pass.

Dermott’s first NHL goal came with his father, Jimmy, in attendance because it was part of the Leafs’ annual ritual of having the players’ fathers join their sons for three games, including some road games. Jim Dermott was the assistant coach of the triple-A minor midget York Simcoe Express when his son was a member of the team. The head coach of the Express was Brian McDavid, father of Edmonton Oilers’ superstar Connor McDavid.

Travis Dermott was selected by Erie in the ninth round, 164th overall, of the 2012 OHL Priority Draft. He played in the 2012-2013 season of the junior-A Newmarket Hurricanes of the Ontario Junior Hockey League and then joined the Otters for three seasons.