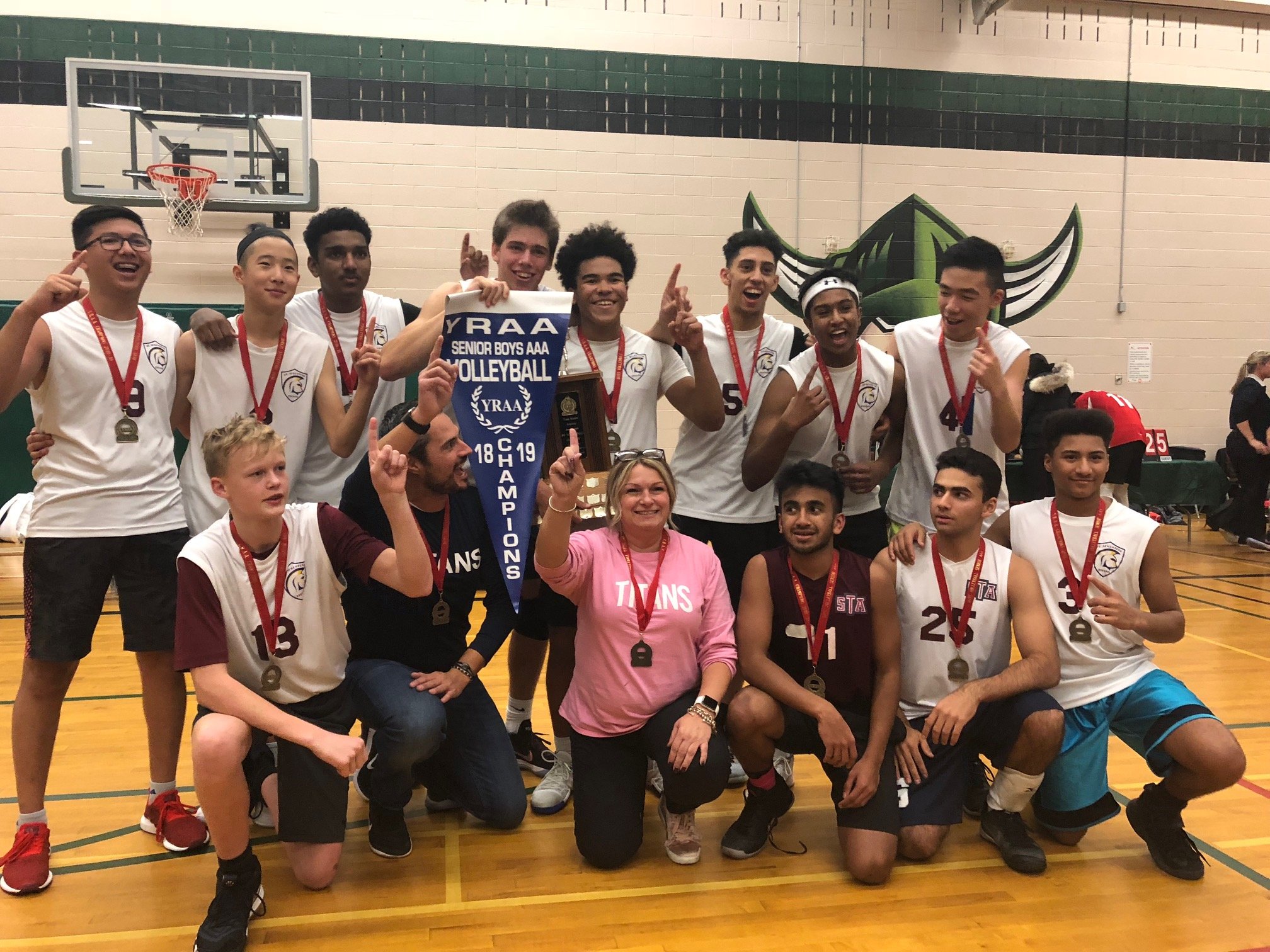 Sporting a perfect record through the regular season and playoffs, the St. Augustine Titans took the York Region Athletic Association (YRAA) triple-A title in volleyball with a four-set victory in their championship match.

“It’s surreal,” said Titans captain Erik Siskna. “I don’t even know what to say. Everyone on this team showed up. Even though we went down after the first set, we knew we had it in us. I’m just so proud of the whole team.”

What made the feat even more significant was the fact that St. Augustine had played their entire season in Tier 2, before knocking off a quartet of Tier 1 squads to take the crown.

“We had the belief that we were better than a Tier 2 team,” said St. Augustine coach Adam Elkaim. “Unfortunately, because of logistics and stuff, that’s where we ended up. But, it turned out to be a godsend.”

The Titans dropped just two sets all season as they finished atop the standings with a 12-0 record. That set the table for future matchups with opponents from the top group.

“Once we got to the playoffs, we said let’s see what we can do in Tier 1,” Elkaim said. “And we played as good as a team as we could have played, and it was just the momentum from one win after another.”

Despite the team’s talented base, which included six starters that are close friends, something always seemed to go wrong, historically, for St. Augustine early in the post-season.

“I’ve been coaching these guys for four years and we always dropped the needle in the first round of the playoffs,” Elkaim said. “So I told them, if we can beat (Bill) Crothers in the round of 16, that’ll give us the confidence that we need to push forward.”

The Titans knocked out the Crothers squad to advance, but then found themselves a set away from elimination in the next round, with Bur Oak ahead 2-1. A decisive fourth and fifth set by St. Augustine would be the difference and that turned out to be the closest they would get to being taken down the rest of the way.

“The resiliency of this team, our mental game, it’s been so good,” Siksna said. “We’ve battled back multiple times. It’s been amazing.”

St. Augustine took on the Pierre Elliott Trudeau Trailblazers in the final, at Richmond Hill High School. The hosts provided plenty of room for spectators, which was needed as both teams came armed with large cheering sections.

“They were there for us the last few games and it helps us so much,” said Siksna of the Titans fans, who would chant, “MVP,” when the powerful left-side hitter came up to serve. “It’s amazing. Just to know that everyone has your back, it’s amazing.”

The Trailblazers took the first set, so St. Augustine calmed themselves down and come out swinging, taking the next three in succession to win the title.

“In the first set, we showed what happens when we get a little nervous,” Elkaim said. “We get tight. The passing was off, the setting was off. I told them after the first set that it was like a warmup set. Just calm down, play your game, and we’ll be fine.”

A trip to the OFSAA provincial finals at Windsor is now in the cards for St. Augustine, something Elkaim thought was very much in the realm of possibility for the Titans, as did his players.

“I told them that, but more importantly, they believed it,” Elkaim said. “They kept that belief and worked as a cohesive unit and I couldn’t be prouder of these guys.”

The Titans impressed at OFSAA as well, finishing with a 2-2 record in round-robin play before advancing all the way to the consolation final, where they were defeated by Neil McNeil.