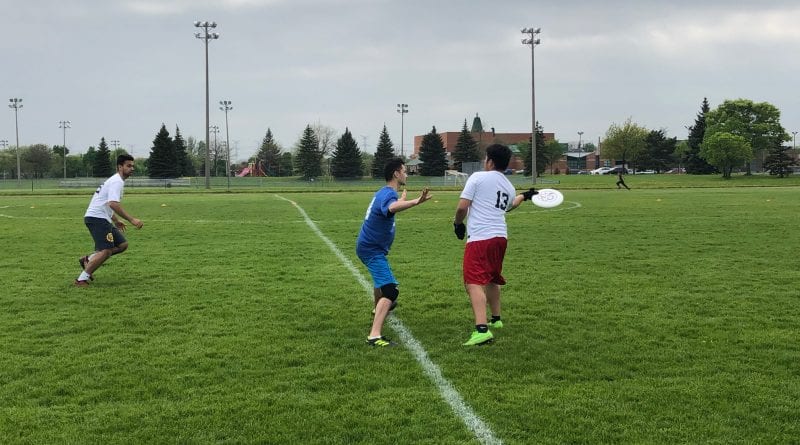 It’s a game played with fire and passion, but there is also plenty of fanfare, cheering and sportsmanship.

The St. Augustine Titans are all-in when it comes to their ultimate team.

A squad of committed athletes, many of whom compete in different sports as well, the Titans have caught the ultimate bug.

“I find it’s a little more competitive than I would (have) thought, but the attitude is really great,” St. Augustine’s Avery Selby explained.

Now in her second year of playing ultimate for the Titans, Selby has found some connections between the disc sport and her primary athletic discipline.

“I play volleyball competitively,” Selby said. “It helps with the defence and stuff. When I first starting playing ultimate, I didn’t think there would be many similarities, but that’s how I’ve learned to play for sure.

“It’s been those little comparisons, like going up for a hit, and here it’s hitting it down on defence.”

Very much like volleyball, where the players come together to celebrate at the end of a point, so too do the Titans cheer on one another after a score or a knockdown on defence.

“It’s really great, because we’re such a good team,” Selby said. “Everyone supports each other so much. Even though ultimate isn’t my main sport, I feel like, even if I make mistakes, I know they have my back. It’s such a great environment and it’s made me love the sport even more.”

George Sunga, one of St. Augustine’s biggest playmakers, has had to take on an additional role on the field compared to his other main sports.

“I play hockey and the difference is that instead of having a ref that calls the game in hockey, in frisbee, it’s your call on the field,” Sunga said. “There’s more leeway and it’s not as strict as if you were in a more organized sport.”

Sunga is big on team sports, and there are few that require the same extent of cooperation with fellow players as much as ultimate, where you can’t even advance the disc without having to pass to a teammate.

“(There’s a) heavy reliance,” Sunga said. “Like every sport, frisbee is a team game and without a team you won’t be able to accomplish anything. Big respect to my team out here and I really love playing with them.”

And then, there’s the matter of spirit points, a part of the game that St. Augustine prides itself in.

“I love that aspect,” Selby said. “There is no ref, so you have to be good and honest towards each other, which is good, because there is lying and (deception) that can happen with other sports.

“It works on having a good attitude but also being a good sport, so it (requires) an all-around good athlete.”

Those points, given by the opponent after the end of the game, are based on how fair, clean, positive and respectful the team was to the other squad.

Given the sportsmanship aspect that is heavily involved in such a score, it’s something that the Titans take seriously.

“Our team, we love spirit points,” Sunga said. “Every game, we set the tone, loud and proud with all of our energy. We want every person on our team to be at that level. If we’re all playing at a low energy, if we’re not as excited as we can be, it’s going to affect our game.”

While Sunga is set to graduate this year, he’s hopeful that more students at St. Augustine come out and experience the joy of playing ultimate.

“Not a lot of people really know what it’s like until they play the game,” Sunga said. “So once they come out to the tryout, or play their first game or practice or anything, it’s when their love of the game really starts to grow and they love the sport in general.”

Stephen Sweet photo – St. Augustine’s George Sunga looks to pass the disc to a teammate beyond the reach of Westmount’s Adam Mondrow in recent regular-season action.