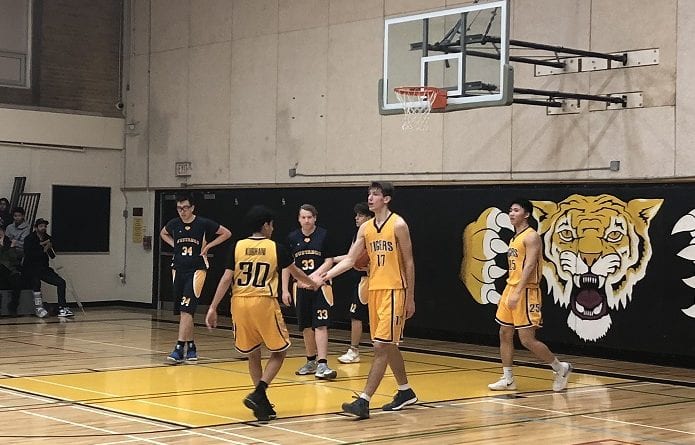 It’s certainly an experience suiting up for the Thornhill Tigers on home court. The senior boys basketball team truly enjoys an advantage, as the stands are packed with fans for nearly every game.

With all of that energy reverberating throughout the building, there are plenty of highs and lows.

When the Tigers are lining up and hitting three-pointers, often coming from the hands of guard Camren Korhani, the spectators go wild.

“When the crowd gets into it, I don’t know how to describe it,” Korhani said. “It just gets crazy in here. The crowd is everything. If we played at a different school with no crowd, it’d be a totally different game.”

The support is very much welcomed by the Tigers, but it leads to a roller coaster of emotions at times. There is plenty of high-fiving and cheering taking place when Thornhill hits their shots, but when they go on a cold streak, or worse, start giving up easy shots on defence, it can be difficult to snap out of.

“I just try to keep my head together and not get too emotional about it,” Korhani said. “I try not to play out of my game.”

Korhani is one of a number of Grade 11s on the senior squad, which features players from all years. For Bensky, a Grade 10 student, his focus has simply been on outworking his opponents, many of whom are at least two years older than him.

“I think we just need to have the mentality that age won’t matter, that you just have to give more heart and effort than them,” said Bensky, one a handful of underclassmen seeing minutes for Thornhill’s squad.

The Tigers have been through a number of ups and downs already this year, sometimes within the same game. Early in the year, at home, they had a lead against Thornlea’s powerful B squad, but couldn’t hold on.

Later in the season, the Tigers had an offensively impressive contest against Alexander Mackenzie, putting up 31 points in two different quarters, but nearly blew a 28-point lead in the fourth before shutting the door late in the game. Given the age and emotion involved, it’s not terribly surprising that the Tigers could manage to put up 31 points in a single quarter and then surrender 29 in the next one.

“We have so many weapons that we can destroy a team from threes, transition, inside, anything,” Korhani said. “We’re very versatile that way. But when (Alexander Mackenzie) was making a run, we got kind of shook and didn’t know what to do. We hadn’t been in a situation like that, where we were up by that much and nearly gave it all away.”

When all else fails, Thornhill knows to focus on its own half of the court in order to create success.

“I think that, if we can come out hard and play really good defence, we can keep winning,” Bensky said. “Defence is definitely the biggest thing for us to be able to win.”

And, despite the ups and downs that come from playing in front of a raucous crowd, Bensky and the Tigers wouldn’t want it any other way.

“I think it’s definitely better playing at home than away, because you have all of that momentum going for you,” Bensky said. “So, when other teams go down, they feel like they’re defeated and can’t do anything. There’s a big advantage playing at home in front of our fans.”

Police have seized a sprawling $9-million mansion, along with 11 firearms with ammunition, more than $1 million in cash, gaming