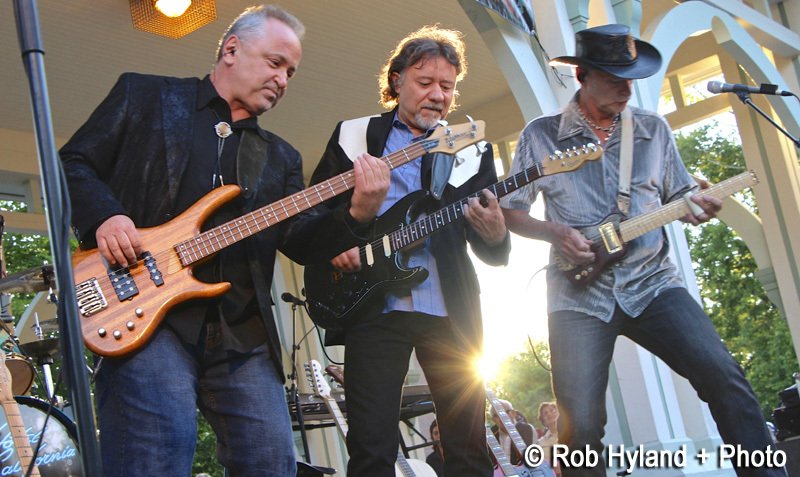 The annual free music series Thursday Nights at the Bandstand is two thirds of the way through its eighth season. With eight well-received performances down and four more to go, regular attendees of the weekly shows at Unionville’s Millennium Bandstand must be wondering how this month’s lineup will compare.

Up next on Aug. 4, is Night Fever, a Canadian tribute to the legendary Bee Gees. By 1979, The Bee Gees had released five platinum-selling albums, including 35 hit singles featuring nearly impossible to sing vocal harmonies. According to the New York Times, Night Fever creates, “an eerie sense of seeing and hearing the brothers Gibb alive and in concert.” They promise to transport Unionville Main Street back to the sounds and looks of decades gone by through performances of hits like, To Love Somebody, I Got to Get a Message, More Than A Woman, Nite Fever, You Should Be Dancing, Stayin’ Alive and more.

The very next week the series switches gears with The Tone Dogs. This returning favourite from last year’s lineup is a blues rock trio in the Texas tradition. They pride themselves on a dedication to authenticity, from musicianship right down to the vintage gear they use. Think classic ZZ Top, Jimmie Vaughan or Double Trouble to get a sense of what you can expect when they hit the stage on Aug. 11.

Aug. 18 sees another annual favourite return to the stage on Unionville Main: Hotel California—the original tribute to the Eagles—has been recreating the unique and popular sound of the Eagles since 1986. Their success has taken them from Japan to Dubai and Toronto to Texas, sharing stages with The Doobie Brothers, Lynyrd Skynyrd and REO Speedwagon along the way.

“Unionville is one of our favourite venues and one of the best audiences the band performs to,” says drummer Dean Young, who bears a striking vocal similarity to his Eagles counterpart Don Henley.

In past years, the audience for Hotel California has been the largest of the season. Get there early for a good seat.

Bringing the series to a close this year is Absolute Journey. This quintet is a faithful reproduction of the Steve Perry era of the classic rock band, Journey. Their set features some of the most recognizable rock songs ever and their singer, Riccardo Curzi, brings singer Steve Perry’s vocals new life.

“People are always telling me that I sound like Steve Perry,” Curzi says of the positive reaction the group receives and adds, “We never end before we play the big hits everybody wants to hear.”

This means hits like Don’t Stop Believin’, Open Arms, Any Way You Want It and even the Steve Perry solo hit, Oh, Sherrie will be on the setlist on Aug. 25. Whether it’s nostalgia or good music you’re after, you won’t want to miss this show.