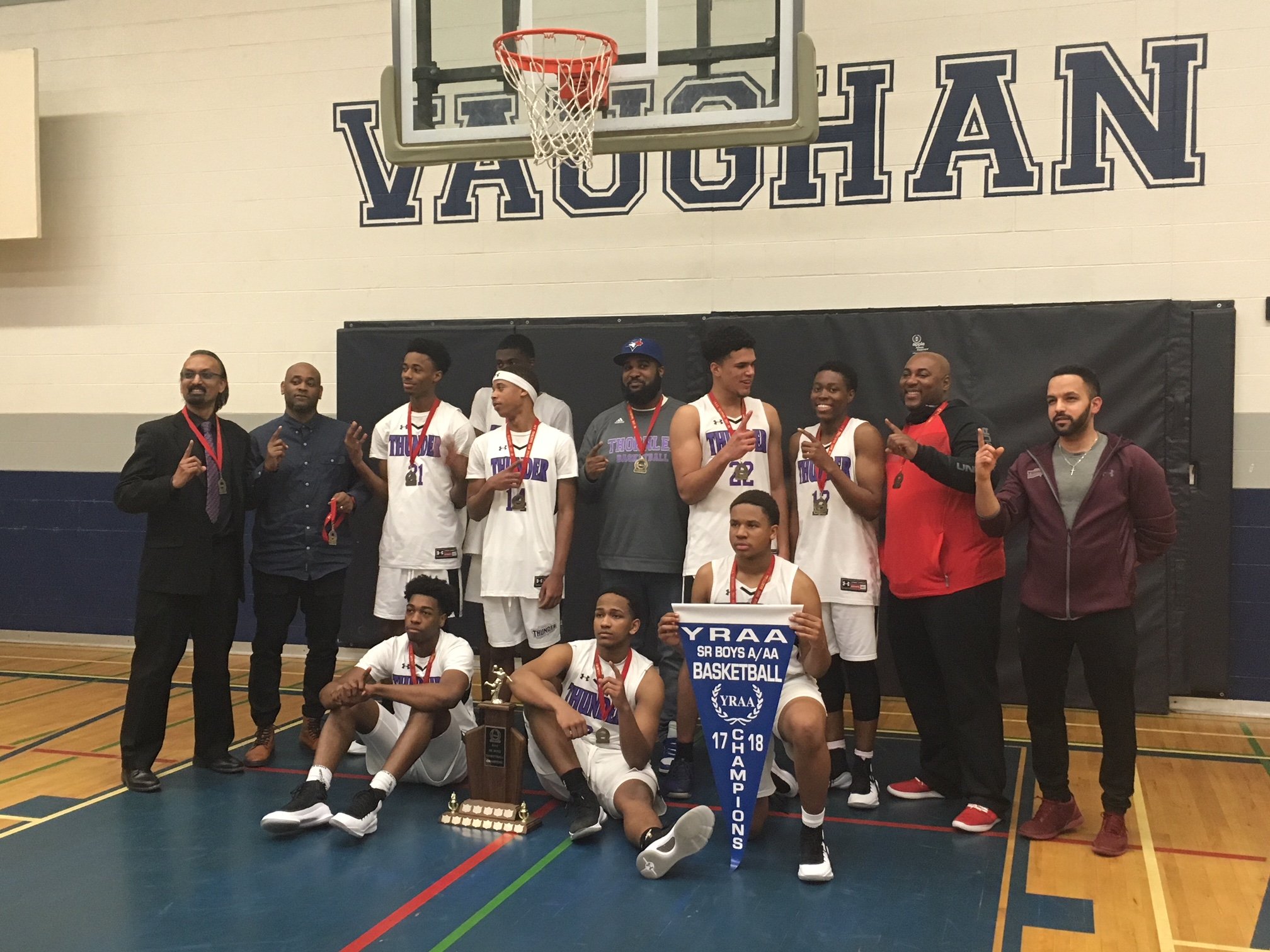 It looked like the perfect finish for Nizam Alkins.

In a moment, though, it nearly disappeared.

Coach Alkins and his Thornlea Thunder blew a 23-point lead in the senior boys basketball York Region Athletic Association ‘AA’ finals with just a minute to go, but recovered thanks to a couple of late baskets by Jordan Carty.

The Thunder knocked off one of Alkins’ former squads, the Milliken Mills Knights, by a 68-66 score, while playing at Vaughan Secondary School, which was the other York Region building where the coach had worked during his 23 years.

“If I had the energy to cry, I would cry,” said Alkins after the exhausting win. “My journey at York Region in these three schools, Milliken, Vaughan and now Thornlea, it’s been about trying to create a positive culture where student-athletes have a forum, and a platform. The buy-in is that you have to do well in school in order to play on the court.

“It’s an all-inclusive thing, and you can’t have one without the other,,” added Alkins, using his familiar, ‘books before ball’ mantra that has been a part of his coaching philosophy for years.

Thornlea had been one of the strongest teams in the YRAA all season, posting one of the top records in Tier 1.

It came out looking the part, storming ahead to a 20-2 lead in the first quarter alone.

After that point, though, the Knights started to find their way back in the game, cutting the deficit to 15 after three quarters.

In the fourth, Milliken Mills went on a 14-1 run, reducing Thornlea’s advantage to just one basket.

“We hoped for an easy win, but I give a lot of credit to Milliken Mills for fighting and clawing back and finding a way,” Alkins said.

The Knights weren’t finished, and with 1:12 to go, Jason Green hit a three-pointer that gave Milliken Mills the lead.

“I’ve been in these types of situations before, so I know how to stay calm,” said Thornlea’s Jordan Carty, one of two Thunder players that had been in a championship game previously. “Everything’s going to be good.

Thornlea had tried to recreate this potential situation for its squad of mainly Grade 11 students during its campaign.

“We calmed our guys down, because we’d developed that over the 35 games we played together this season,” Alkins said. “We’ve tried to put them in every situation we possibly could so that, when we are at a moment like this, we know not to make the same mistakes we might have made in previous games.”

After a free throw extended the Knights advantage to 66-64, Carty took the ball the other way, went through the middle and floated a shot in to even the score.

A Milliken Mills miss got the ball back in Carty’s hand, and with less than a second difference between the game and shot clock, he was content to wait things out.

That is, until Carty saw his chance.

“I (noticed the defender) reach, so I tried to attack, and go straight to the basket,” Carty said.

Thornlea’s second-year senior drove the lane and dropped in a layup to put his team back in front, and after the Knights last-ditch attempt came up short, the Thunder claimed the championship.

“The guys held their composure, they knew what had to be done, and they took care of business in that last 60 seconds,” Alkins said.

Carty came through in the end for his coach, knowing the situation at hand.

“It was huge,” Carty said. “I’ve been with him since Grade 9 and getting better and better. It was important (for both of us).”

Alkins now leaves his Thunder with a title, but he’s hoping his players get more out of the experience than just the medals.

“It’s very special,” Alkins said. “It’s what I would call good karma, and I really try to pass that on to all the players. We have a relationship where I was able to say to them before the game that this was probably my last time coaching a York Region game.

“These are character kids,” Alkins added. “Every one of them listens to the instruction, they take it in and reflect, and then they show it on the court. They’re truly student athletes.”