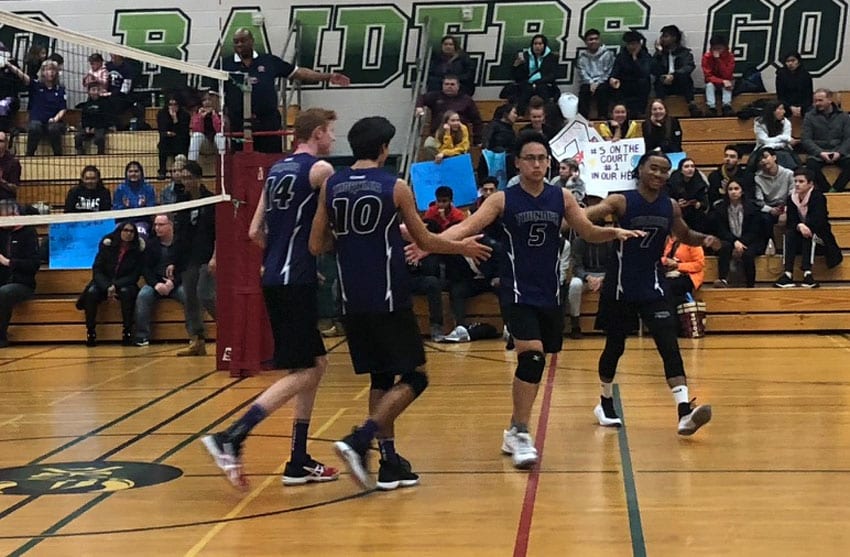 The title was three years in the making.

Since 2016, the Thornlea Thunder senior boys volleyball team had a plan to work toward winning the York Region Athletic Association (YRAA) double-A crown. Now, it’s mission accomplished, as they rolled through the championship match, played at Richmond Hill High School.

“We just learned over the season how to play together,” said Thornlea’s Dylan Sinclair. “It’s been the same team for the most part since Grade 10, and it was a three-year plan to get to this point. And even though we didn’t have the best regular season, we knew we had the potential to make it this far.”

The numbers during league play were underwhelming at best for the Thunder, who went 6-7 to finish 13th of 27 teams in Tier two competition. But, it was one bad stretch which accounted for almost all of Thornlea’s losses.

“During the middle of the season, we went into a bit of a slump,” said Thornlea’s David Kang. “Gradan (Clemens), who’s one of our stronger players in the middle, got injured. After that, we went on a run where we lost about six games.”

Following an overnight tournament at Waterloo, which served to galvanize the charges, the Thunder went on a tear.

“When we came back, we won our home tournament without dropping a single game,” Kang said. “We didn’t end up losing a game here after that.”

Thornlea stayed upbeat as they continued to improve and it paid off.

“Keeping positive energy was very (important),” Sinclair said. “Our serving did us really well as did our attacking, but you can’t get anywhere without the passing. The passing was huge for us. Our blocking was huge, too. We weren’t that good at that at the beginning of the season and our coach really wanted us to tighten that up.”

Thornlea took four sets to dispatch Langstaff in its opening playoff game, but then were really impressive by sweeping Renaissance, just a couple of days later, a team who went 10-2 in Tier two play. After coming from a set down to knock out Toronto District Christian, Thornlea advanced to the finals, setting up a matchup with Jean Vanier, a team they had defeated in October.

The Thunder came out with a bang thanks to Kang, who served up five aces in an 11-point run to open the first set.

“I just always try looking for the holes on the court,” said Kang, who had a fan club supporting him at the game. “If I find one, then I just keep pushing at it. Once they close it up, I look for other weaknesses on the other team’s side and keep picking at it until we score as many points as we can.”

Thornlea played with confidence and familiarity, which was largely a product of having kept predominantly the same unit together over the past three seasons.

“It helps a lot,” Sinclair said. “It’s a team sport and you need passers, setters and hitters. We developed our skills to (complement) each other.”

After handily winning the opening two sets, Sinclair had the opportunity to send his team to the provincial championship (OFSAA) with a serve. As he set up, a smile crept across his face.

“I was wondering if I should go for a jump spin or anything like that,” he said, with a grin. “I decided not to and just go for a deep float. Luckily, I aced it and that was it.”

The shot sent Thornlea to OFSAA at Sydenham, where the Thunder went 1-3 in round-robin play before falling to the eventual antique-bronze runners-up LaSalle in the consolation quarter-finals. But the Thunder were thrilled for the opportunity, as their hard work had paid off.

“We had to really come together as a team to accomplish this goal,” Kang said. “Our coach always said that it was a three-year process. We developed and grew as a team toward this common goal and it came true.”