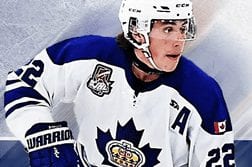 Last September, the Markham Royals laced up their skates and hit the ice. Fans were happy with the Royals who replaced the once loved Markham Waxers. Ten months later, the Royals emerged as division leaders with a 31 wins against only 17 losses. They went on to battle their way to the OJHL semi-finals.

“Our first season in Markham was excellent. We felt we did a great job engaging our players within the community,” says assistant general manager Spencer Hyman. “We are very proud of what we accomplished.”

In addition to winning their division, the Royals also graduated many players on to play college hockey.

“We are also extremely proud of the players we graduated onto the next level,” Hyman adds. “At the end of the day that’s what we are all here for. The OJHL is about development, and helping players achieve their dreams on and off the ice.”

This has left a few spots open on the roster. This past June hopeful players both local and from across southern Ontario attended Prospect Camp in hopes of joining the team. Many of these hopefuls got to don a Royals jersey and compete at the Team Elite Prospect tournament later that month.

“Expect the new players that come in to have the same work ethic and to compete as hard as the ones graduating,” says Hyman.

The team does expect nine or ten forwards to return for the 2016-17 season as well as four defensemen and both goaltenders Marcus Semiao and Scott Smith.

Another change made this summer was last season’s assistant captain, Lucas Condotta, taking over the mantle of team captain. Condotta is entering his fourth season in the OJHL and has steadily worked his way from playing fourth line for the Pickering Panthers up to the first line in Markham. He takes over for graduated forward Aaron Spivak, who will be playing at the university level this year.

“Lucas does everything right on the ice and in the dressing room,” Hyman says. “He is everything a coach can ask for and more. He has earned the right to wear the ‘C’.”

The Royals began their return last year by defeating the nearby Stouffville Spirit five to three and went on to beat the Spirit three more times last season. This has fanned the flames of a rivalry between the teams. Not surprisingly, Stouffville is looking to take it to the Royals come September.

“We have tremendous respect for the Spirit,” Hyman says diplomatically, “Ken Burrows does a great job over there and we’re happy to be a part of this storied rivalry.”

How this rivalry plays out will be determined starting in September but preseason games begin in August.

“For the first year back in Markham we feel we had a great year, but there’s unfinished business, we would like to bring a Buckland cup to this community,” predicts Hyman, “We want to win for the city of Markham.”

Scheduling and ticket information can be found on the Royals’ website, www.markhamroyals.pointstreaksites.com