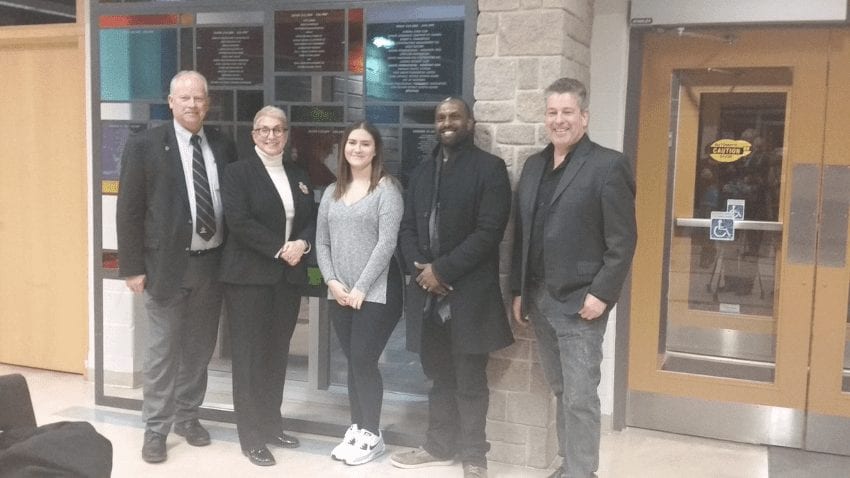 Fifteen-year-old Amber Fusto was the winner of the York Regional Police first annual Voices over Violence, a competition that motivates young people to come up with original songs explaining the importance of stopping violence.

Six people were selected to perform live at the Voices over Violence event at the Community Safety Village inside Bruce’s Mill Conservation Area, where a panel of judges then selected the top three winners. The judges were York Regional Inspector Gary Minor, Sam Reid guitarist of Glass Tiger, Ram Phanabalasingam Ministry of Community Safety for York Region and Aaron Spink a music teacher at Cosmos Music.

Song submissions were to inhibit depth and reflection while representing young people speaking out on the topic of violence and its damaging effects. Target audience for submission was between 12 to 24 years old. Funding for this initiative was provided by the Provincial Anti-Violence Intervention Strategy (PAVIS).

It was Fusto’s original song “End it”, which won her first place; she wowed the judges with her superb vocals and impressive piano playing.

“I am so excited that I won first place, it is a very big accomplishment for me,” Fusto said. “I love playing and writing music and I hate violence, so I felt by using something I am good at, helped me get a very important message across.”

Minor said York Regional Police prides itself on creating innovative programs to engage youth and to highlight the positive interaction between police and community.

“The Voices over Violence music competition invited young musical talent to create an original song on the theme of Ending Youth Violence and we got a lot of impressive candidates,” Minor said. “It is nice to see so many young people want to take partake in stopping violence.”

Reid said the program is very important because it uses art as a medium to get the message across.

“It is peer to peer, created by them and for them, by doing this the message will have more of an impact,” Reid commented.

York Regional Police hopes that this event will create a lot of attention so they can hold another contest next year.