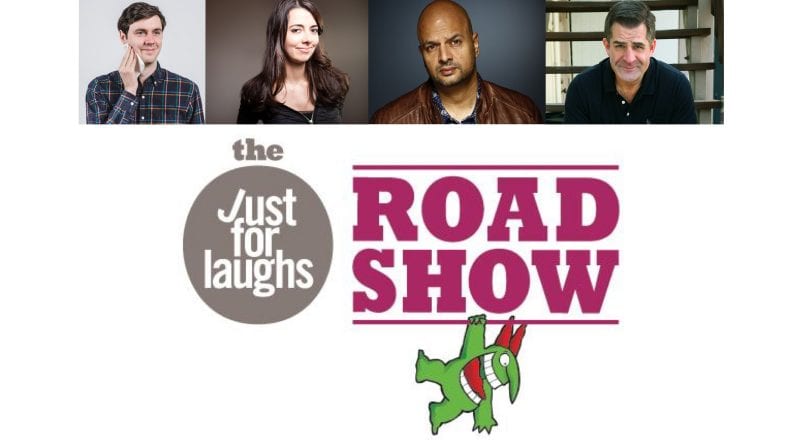 Beginning in 1983, as a small, French language, comedy festival in Montreal, the name Just For Laughs is now known by most Canadians and all around the world.

After adding English speaking comedians in 1985, the festival has since grown to be the premiere showcase to Hollywood for comedians. Deals are struck, careers are made and lives are changed. The reality is, the path to making it as a comedian flows through Just For Laughs.

Since adding several television shows and now satellite festivals, like JFL 42 in Toronto and others in Vancouver and Sydney, Australia, the brand has done nothing but grow. Bringing new comedy and comedians to fresh audiences is a way of life for the organization.

“I could not be happier to be on this tour,” Canadian comedian and host Adam Christie says. “Getting on the road and performing is truly the best part of this job.”

Christie is the award-winning stand-up comedian and writer who has been tapped to host this, the 17th edition of the JFL Roadshow. He’s worked on many acclaimed television shows, such as Schitt’s Creek, Baroness Von Sketch Show, and This Hour Has 22 Minutes. He has taped gala performances for both the Just for Laughs comedy festival and the Halifax Comedy Festival, and was even recently nominated for a 2020 JUNO Award for Comedy Album of the Year.

“This past year, I’ve done all the Just For Laughs festivals,” Christie says. “Doing stand-up at the Sydney Opera House was surreal.”

Featuring four festival alumni, including Christie, the Just For Laughs Roadshow pulls into the Flato Markham Theatre this summer.

Carmen Lynch is an American comedian, actress, and writer of Spanish descent, based in New York City. She has appeared on The Tonight Show, Inside Amy Schumer, Last Comic Standing, The Late Show and A Prairie Home Companion. When she isn’t on the road, Lynch can usually be found at the legendary Comedy Cellar in NYC.

Ali Hassan is a stand‐up comic and actor as well as the host of Laugh Out Loud on CBC Radio and SiriusXM, on which he interviews top Canadian comedians for a listenership of over 1 million people. Previously the Lead Comedy Panelist on George Stroumboulopoulos Tonight, Hassan can be seen on television now with recurring roles on Man Seeking Woman (FX), Odd Squad (PBS Kids), Game On (YTV), and the CTV mini‐series Cardinal.

“Ali and I have been good friends for a while. Who am I kidding?” adds Christie with a smile. “I’ll happily fight him every night. That’s right, the encore each night of the tour will be a fight between me and Ali Hassan.”

Kidding aside, the headliner of the tour, in veteran Todd Glass, will likely be much more entertaining than a slap fight between Canadian comics.

Glass grew up in Philadelphia and started his comedy career at the age of 16 in 1980. He has since been seen on many tours, comedy specials, and late night shows. He has appeared on Sarah Silverman – I Love You America, The Daily Show, The Tonight Show with Jimmy Fallon, Tosh.O, Conan O’Brian, and Jimmy Kimmel Live! a total of 13 times. Todd’s latest special, Act Happy, is currently on Netflix.

“I’ve listened to and watched Todd Glass all my life,” says Christie. “He’s been everywhere. I can’t wait to work with him.”

The show promises a great night at the theatre and, of course, many laughs too.

“It’s going to be a great night of comedy,” Christie says, “and a mediocre night of boxing, when I get my hands on Hassan.”

Notice: Due to COVID-19 this performance has been postponed until June 24.