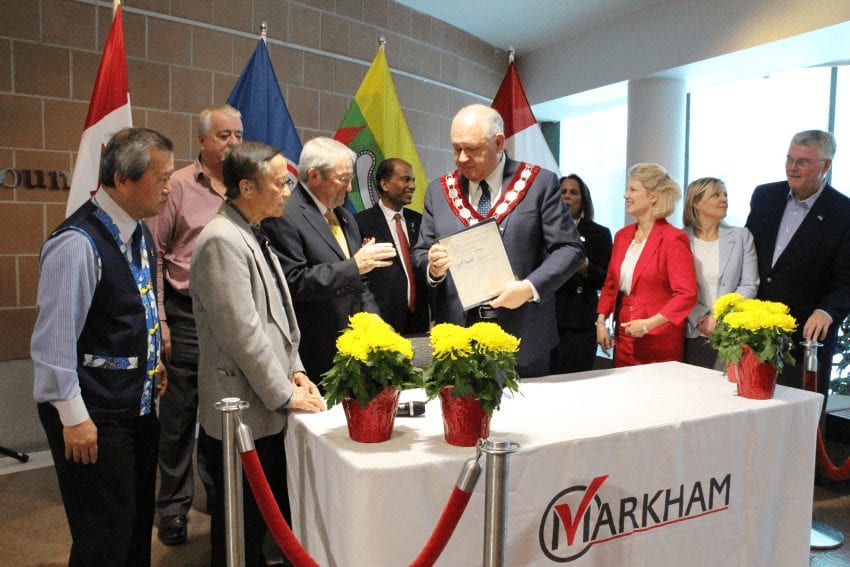 The City of Markham and the Eabametoong First Nation (EFN) of the Matawa Region made history on January 31, when Markham Mayor, Frank Scarpitti completed the signing of a Cultural Collaboration Agreement.

Talks began in May, 2016 between Chief Elizabeth Atlookan, Councillor Louie Sugarhead, past Grand Chief Harvey Yesno and Mayor Frank Scarpitti which resulted in a Motion being passed to proceed with the agreement. The talks centered on a partnership based on listening and learning and promoting an exchange, collaboration and interaction, which eventually led to the first collaboration of its kind between a GTHA municipality and First Nation.

The Matawa Region and its residents will be able to achieve reconciliation through this partnership with The City of Markham and work towards mineral development of the North, an increasingly educated Youth population and impact change on the inequities of the past.  This Agreement will also promote a social, cultural and economic collaboration in conjunction with Canada’s sesquicentennial celebration in 2017. The EFN have been invited to partake in Markham’s Canada 150 Showcase celebrations in 2017 to promote harmony and goodwill for the betterment of their residents and to stimulate public awareness through their Cultural Tourism Showcase. The Showcase will provide a unique opportunity for municipalities to bring the sesquicentennial vision of nation-building into reality and is sponsored by the Northern Ontario Heritage Fund Corporation, Ontario Aboriginal Economic Development Fund, Kiikenomaga Kikenjigewen Employment and Training Services, and Poverty Action Research Project.

It will also play a significant role for Youth Engagement activity planned for EFN, as it includes a Juried Student Art Project in Markham in May and a 2.0 credit high school course based on the Cultural Tourism Showcase called “Arts and Cultural Tourism” via the John C. Yesno Education Centre. The Agreement is being described as a “tangible expression of reconciliation” between the municipality and FN that will bringing cross-cultural enrichment for both.

This collaboration helps pave the way for an innovative exchange between municipalities and First Nations to work together to alleviate the inequities of indigenous life which often lead to despair, drugs, and suicide within their communities. The EFN currently operates as a cash economy with little opportunity for employment and this new agreement will bring about much needed ideas and set realistic goals toward improving the lives of EFN through a healthy, strong community built through an improved economy. The City of Markham has expressed a commitment to bring innovative business and technology to the table in serving the needs of the EFN community. This will include municipal management resources, business assistance and mentoring opportunities.

A positive chapter is emerging in the EFN community and Markham Mayor Frank Scarpitti hopes that these legacy projects and ties will endure long after Canada’s sesquicentennial celebrations come to an end:

“In a spirit of harmony and goodwill, I am hopeful other municipalities will build friendships and support our First Nations communities in Ontario. Together Markham and Eabametoong First Nation are hopeful this model will result in positive advancements in both communities.”

The Mayor also expressed plans to establish and improve access to clean water, developmental youth programs, community engagement activities, and advice on government grants for the EFN. Mayor Scarpitti also mentioned, at the signing, that there would be a cheque presentation to the EFN Tribe at an early February Chinese New Year Celebration dinner in Markham.

Here is a timeline of the meetings and events that led to the ground breaking partnership:

October, 2016: CAO Andy Taylor and Ken Caplan travelled to EFN for a community tour and discussion, including their participation in EFN’s Cultural Tourism Showcase. There, he met with the band office, nursing school, communications facility, Chief Atlookan, eco-tourism and job creation managers.

November, 2016: Meg West and Asare Kester-Akrofi of Markham met with the Youth Council in EFN, including a skills training session and visit to a semi-complete rehab facility, powwow grounds and five acre community garden.

January 18, 2017: Chief Elizabeth Atkoolan signed the agreement in EFN on behalf of her community.

Some of the next steps that will take place include: