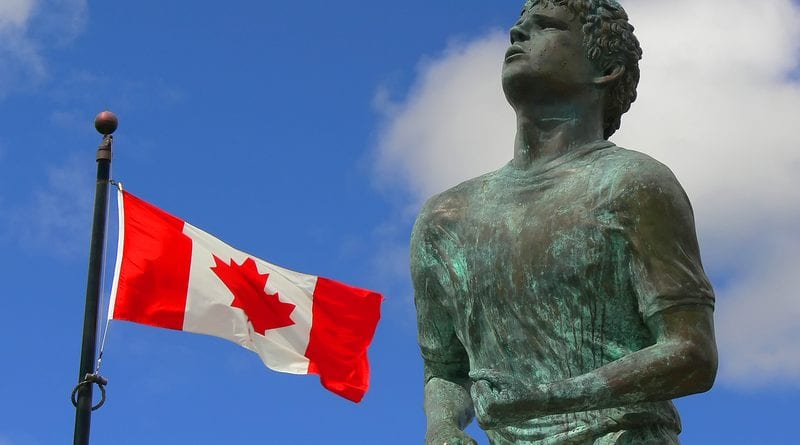 In 1980, Terry Fox set out on his Marathon of Hope not knowing how Canadians would respond to his plea “somewhere the hurting has to stop.” Canada answered his plea with Terry Fox Runs in hundreds of communities, thousands of schools, and millions of supporters across Canada.

Today, the Foundation is proud to announce the opening of the first-ever virtual Terry Fox Run in 650 communities across Canada. In these uncertain times, the one certainty we have is that cancer is not waiting for COVID-19 to be over.

This year, Canadians will unite in spirit, not in person, for their own version of the Run on September 20, 2020. “Terry Fox Run 2020. One Day. Your Way.” Millions of Terry Foxers will continue to honour Terry, aided by new technology that will enhance the virtual participation experience by providing a way to “get fundraising, get inspired and get fit.”

Adding to the excitement of this special 40th Anniversary year, adidas Canada has harkened back to their storied history with Terry by announcing a limited edition nine-piece collection of Terry Fox merchandise, including the release of the original Orion running shoes. All net proceeds of the collection will go to The Terry Fox Foundation to support the best and brightest in Canadian cancer research.

“The Foundation is honoured that adidas Canada continues their support with such an incredible initiative,” remarked the Foundation’s Interim Executive Director, Ara Sahakian. “Forty years after Terry’s run, the Fox family and adidas have given Canadians the exciting opportunity to not only own something that speaks to the best in all of us but to also support Terry’s mission to find a cure for all cancers.”

“Terry once said, “Anything is possible if you try”, Sahakian noted. “In 2020, a year where we are all learning to live life differently, there is only one way forward for The Terry Fox Foundation: Terry’s way. We have to try.”

Wherever you are. Around your neighbourhood, backyard, down the street or around the block. Walk, Ride, Run!

Register as an individual, family or a virtual team – start your fundraising effort today. Visit https://terryfox.org/run/