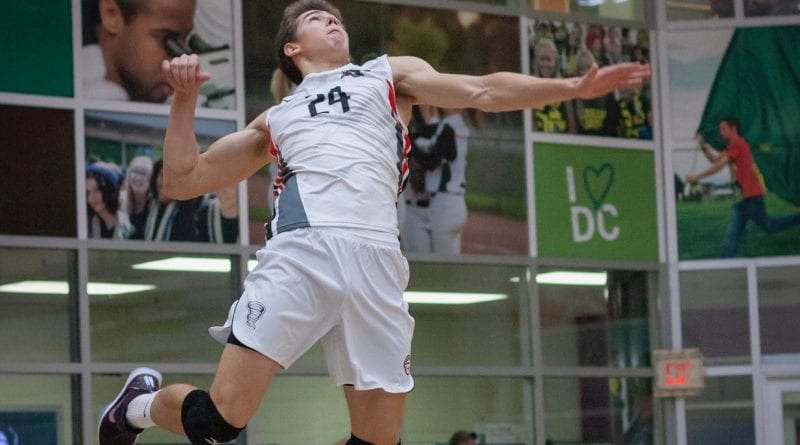 It’s already been quite the year for Erik Siksna.

The St. Augustine grad has seen time with the youth national volleyball team, won a major award, and has signed on to play for the defending Ontario University Athletics (OUA) champions Queen’s Golden Gaels.

Siksna was honoured in the spring with the Ken Davis Memorial Award, given out by the Ontario Volleyball Association to a male athlete, aged 18 or under, for their on-court accomplishments as well as their spirit and work within the community away from the gym.

“That was a pretty big surprise,” Siksna said. “I got an email telling me that I’d won the award and that I was nominated by my (club team) coach. That was a big honour, knowing all of the past players that have won that.”

Siksna has volunteered as a camp counsellor as well as travelling to Ecuador to help dig the foundation for a community school.

To be recognized for what he does away from the game is a significant thing for Siksna.

“Honestly, that means so much to me,” Siksna said. “You can be the best volleyball player on the court, but having those other attributes off of the court, that’s what can take you to the next level.

“Being identified as that really means a lot to me, and I take pride in that.”

He has been a fixture for both the provincial and youth national team, competing with them in a number of events, including the United States of America Volleyball (USAV) High Performance tournament for Canada in July.

“It was a great experience,” Siksna said. “It was my third year in a row playing for that team in that tournament, and every year it’s a blast. It’s the top players from across Canada and we’re getting new insights, new feedback from our coaches there.

“It really helps me grow as a player and it’s a ton of fun as well.”

Siksna welcomes the different perspectives that national-level coaches have been able to offer him as he continues to develop as an elite volleyball player.

“It does the world for me as a player,” he said. “I get to play with the top players from across the country, different coaches and coaches with new insights to help my game.

“Those are the kinds of things that help me bring my game to the next level.”

The next rung on the national team ladder is the junior squad, which the Markham native will be eligible for in 2020.

“I definitely plan on trying out for that next year,” Siksna said. “I’ve definitely played with players in the past who are now on that team, and knowing a lot of those guys, and how they play, and what makes them so good, that gives me something to aspire to.

“That’s definitely been a goal of mine for a long time and I’m definitely looking forward to that opportunity.”

But Siksna is looking to September as his next big step, as he tries to crack a deep Queen’s roster.

“I’ll be playing against a lot of bigger, older, stronger guys with a lot of experience at that level, so that will be a challenge for me,” Siksna said. “That’s where having that experience of playing at a higher level will help me out. But honestly, just going in, being confident in myself to be able to play with those older guys, if I can just do that, I will be able to keep improving and hopefully, it all goes well.”

Adjusting to university life both on and off the court will be a challenge, but it’s one that Siksna is ready to take on.

“It’s going to be busy for sure,” Siksna said. “It’s a lot more volleyball than I’m used to, but I’m excited for that. I know it’ll be a lot of fun. It’ll be good for my development as a player. If I can just manage my time well and work hard I should be able to do it.

“It’ll be a new experience, being away from home and doing these things, but I’m definitely looking forward to it.”

Photo: There have been plenty of opportunities for Erik Siksna to represent his province and country over the past few seasons. Photo courtesy of Erik Siksna.