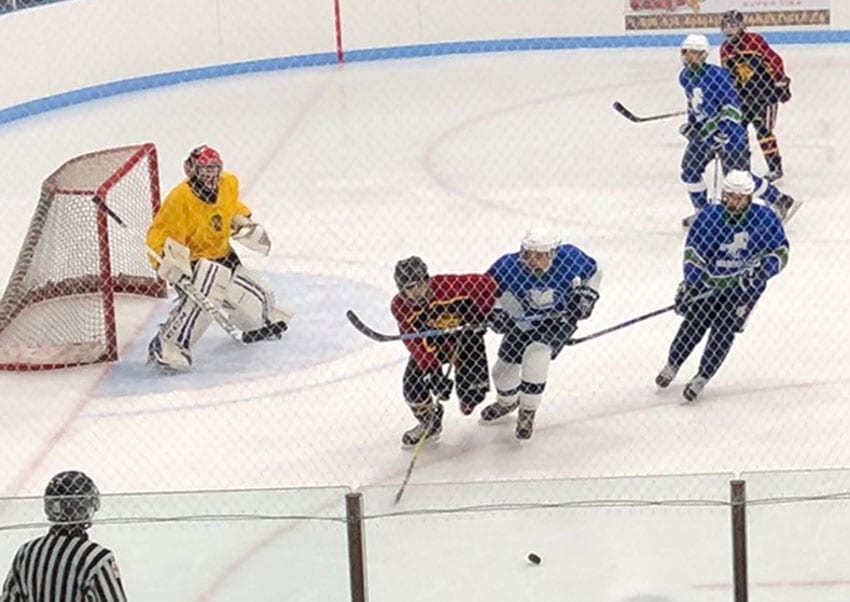 There’s been a lot to like for the St. Augustine Titans this season. The senior boys hockey team, relying on a good number of second-year athletes, have rocketed up the standings in the Tier two Central Division.

It’s been a strong team effort across the board that’s been leading to success thus far for the Titans in 2018-19.

“We’ve had lots of hard work from our guys,” said St. Augustine’s Elias Vavitsas. “We’ve got good hockey sense on this team, we move the puck around really well, and do a good job on the cycle down low.”

Vavitsas was on the team last year, which featured a lot of older players. This year, St. Augustine carries a much younger roster.

“Last season, being a Grade 9 on a team with a lot of Grade 12s, it was a little different,” Vavitsas said. “I looked up to the Grade 12s. This year, there are a lot of Grade 10s. That means that we all understand each other and know where we’re coming from and all, and everybody gets along well.”

St. Augustine’s coaching staff is impressed with the team’s unity.

“There’s a great culture of respect and team spirit with our guys,” said St. Augustine staff coach Rocco Di Donato. “They carry that regardless of ability. One of the beautiful things about high-school hockey is getting a chance to play with all of your friends and they’re really enjoying that.”

As is often the case with virtually every sports team in high school, there are a variety of different abilities in play when the Titans hit the ice. At the top end of that is Vavitsas, a minor midget triple-A player with the Markham Majors who is eligible for the Ontario Hockey League draft this upcoming spring.

“I really try to bring positivity into the (high-school) game with my teammates,” he said. “I try to lead by example out there.”

The maturity of Vavitsas, a second-year player, is a common theme among those who put on the Titans jersey a season ago.

“For all of the Grade 10s who played as Grade 9s, they got experience playing the high-school game,” said St. Augustine community coach Dave Darnley. “We’re really starting to see that show this year.”

It certainly doesn’t hurt that many of those players, now having had a year of York Region Athletic Association (YRAA) hockey under their belt, are playing a high enough level outside of school.

“We’ve got a lot of GTHL (Greater Toronto Hockey League) players on this team,” Darnley said. “That allows us to have some flexibility when it comes to the systems we run, because they come in with a good understanding of how to play the game.”

St. Augustine has already proven itself to be one of the fastest teams in their loop, outskating their opponents with regularity through the first half of the Titans season.

“We come out with an aggressive forecheck and backcheck, and that helps create opportunities at both ends of the ice for our guys,” Darnley said.

Winning certainly doesn’t hurt the cause for camaraderie and that’s something St. Augustine did plenty of through its first month of the regular season. But the squad the Titans have brought together is one that, no matter how they play, is going to have an excellent time working together.

“We’ve got great chemistry and a great group here,” Vavitsas said. “It helps that we’re all around the same age. It’s a group of young guys that gets along really well and has some laughs along the way.”