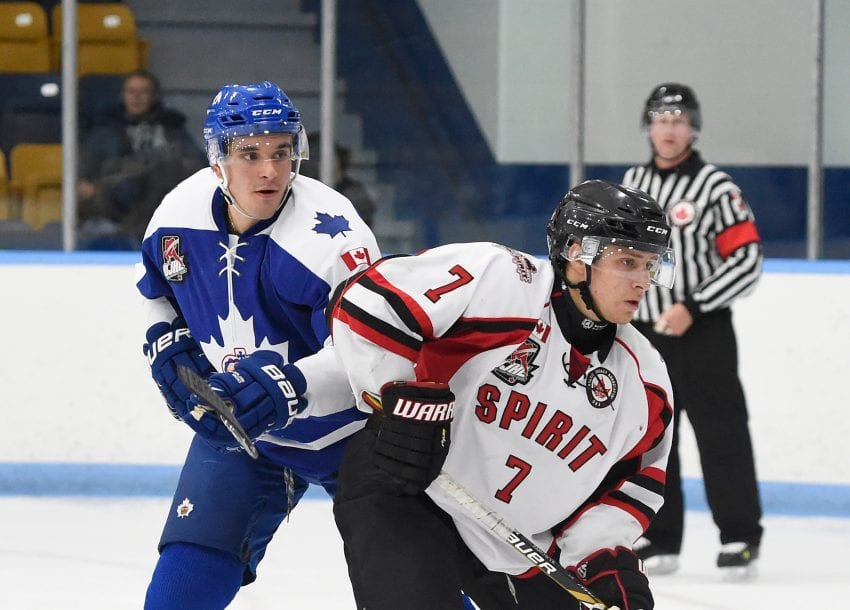 The closest first round playoff matchup in the OJHL may just be the Markham Royals and the Stouffville Spirit.

The Royals finished the season in first place in the North East Division and earned the 2nd seed in the conference. Stouffville, despite settling for seventh in the conference, were only two points behind the Royals for first in their division.

Leading the way on the offensive play for the Royals were Lucas Condotta with 65 points including 26 goals, Laine McKay with 54 points and Rylee St. Onge, tying Condotta on goals, registering 50 points. Despite these numbers, Markham struggled on the powerplay only scoring 28 goals and recording a power play percentage of 12.3, fourth worst in the league. But the Royals’ penalty kill was much better at 81.4% and adding 10 shorthanded goals.

For the Spirit, they relied on Josh Argier, Andrew Hughes, and Max Novick to provide the bulk of their offence. Argier led the team with 49 points including a team-high 32 assists. Hughes and Novick were right behind with 45 and 44 points respectively. Stouffville had a top-4 power play during the regular season at 22.7% and a top-6 penalty kill at 85.3%.

Between the pipes for the Royals is Marcus Semiao who started 44 games and had 25 wins, 19 loses with a 2.75 GAA and .921 save percentage, good for 14th in the league. For the Spirit, they will look to rookie goalie Hunter Jones who posted a 7-7-0 record with one shutout as a 16-year old. Jones’ totals included a 2.74 goals against average and a .917 save percentage.

During the regular season, the Royals took the first two match-ups 3-2 in Markham and while in Stouffville the Spirit won 4-1 but lost 5-2.

This should be a hard-fought battle between two close rivals which may go the full seven games to decide the winner.