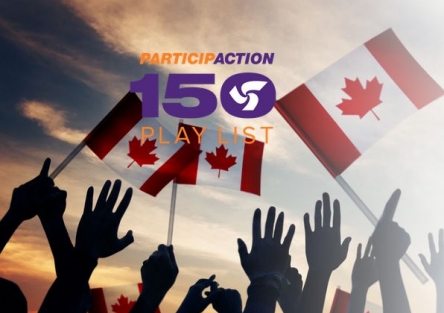 The Markham Pan Am Centre was built to host some of the world’s and the country’s top athletes, but there’s a chance for you to put your own athletic prowess on display, and get your heart pumping there this month.

In celebration of Canada’s 150th birthday, ParticipACTION is touring the country, stopping in Markham on May 14 as part of its efforts to get the country up and active.

“This is a massive effort, the biggest project we’ve ever done,” says ParticipACTION Director of Communication and Public Affairs Katherine Janson.

Work on the ParticipACTION 150 Playlist kicked off last fall, with a survey that received almost 500,000 votes, asking Canadians to list 150 activities that define them. A big part of the year-long effort, says Janson, is ensuring Canadians see themselves in the list.

While many traditional pastimes like hockey, curling and jogging easily made the list, so too did many more obscure games, from the indigenous “stick pull” (think tug-of-war with a stick instead of a rope) to the strength-testing “knuckle hop,”  the tennis-ping pong hybrid “pickle ball,” and the more fantastic Harry Potter-based Quidditch. Even activities like snow shovelling and dog walking made the cut.

ParticipACTION’s mandate is to engage and excite Canadians and the year-long celebrations made it “a great way to celebrate Canada’s 150th birthday, by being physically active,” Janson says.

Canadians can visit the Play List website, sign up and check off activities as they do them and win prizes along the way. Some are using social media and the #150Playlist to document it as they make their way through the entire list, Janson says.

As part of the program two teams are crossing the country, visiting more than 100 sites including the Markham stop.

”The Pan Am Centre is a great place for the Playlist to visit because it’s the kind of place that attracts the community for a verity of different reasons,” Janson says, noting its role hosting from beginner to elite levels of athletes. Moreover, she says, the event is a great place to cross several activities off your personal list in one shot.

The tour launched in December at Toronto’s Nathan Phillips Square and is stopping at least twice in every province and every territory, partnering with local groups along the way. School groups, local leagues and clubs are harnessing the opportunity to show their stuff and track their own progress through the activities.

The ParticipACTION Play List 150 team will be at the Pan Am Centre (16 Main St., Unionville) from 4 to 8 p.m. on May 16. For more information on the program and to sign up visit participaction.com/150