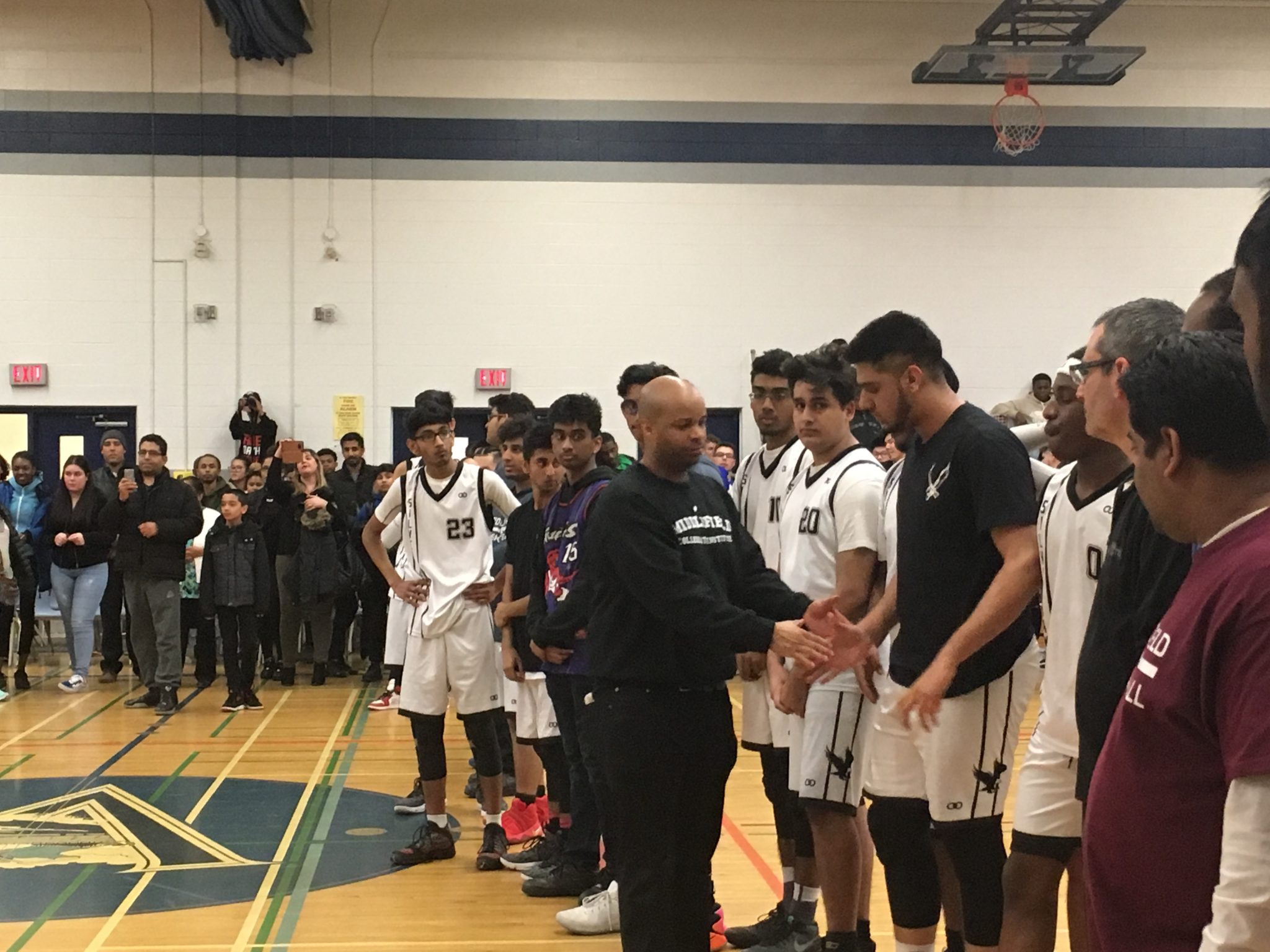 This was going to be the year where things were different.

The Middlefield Silver Hawks, having run the table in regular-season play, were looking to finally take the York Regional Athletic Association (YRAA) senior boys triple-A basketball title away from the perennial champion Vaughan Voyageurs. When the final buzzer sounded at Vaughan, the Silver Hawks came up two buckets short, falling 60-56 to the Voyageurs.

“It hurts, and you can’t believe it,” said Middlefield coach Nigel Escoffery. “We didn’t see it going this way. We can talk about how great this season was, the tournaments we won this year and the steps we took as a program, but when it’s all said and done, we didn’t finish the job. We did a great job this year, but there’s an empty feeling after (losing the final) that’s going to sit with us for a while.”

Jonah Nakhla put up a game-high 22 points for Vaughan while Nick Kwawkumey added 19. Manroop Sandhu and Raeshawn Washington scored 16 and 15 points, respectively, for Middlefield, which had a strong fan presence in attendance for what amounted to a road game in hostile territory for the top seed.

“We really wanted to see this happen for our school,” Escoffery said. “Our school has been behind these guys all year and our guys have been disciplined all year, but they just came up short.”

Middlefield’s team defence limited Vaughan through the first 12 minutes of the opening half, but the Voyageurs began to connect on their three-pointers. They hit a quartet of them to pull ahead of the Silver Hawks 26-24 after the second quarter. Kwawkumey and Freddy Martello continued to hurt Middlefield from the perimeter in the second half and, coupled with an off night for many of the Silver Hawks shooters, Vaughan was able to extend its lead to seven by the midpoint of the third quarter.

Middlefield briefly took the lead before the third quarter ended, but trailed shortly after in the fourth. Vaughan took a six-point advantage with 50 seconds remaining, but Washington’s drive to the net earned him a basket and free throw, which he made to cut the deficit in half. Washington made another layup to drop Vaughan’s lead to one, but it was quickly brought back up to two after Martello hit a free throw.

With less than 10 seconds remaining, Middlefield’s Chris Naidu, who had been honoured as a YRAA first-team all-star before the contest, drove through the paint, but missed his shot. The Voyageurs grabbed the rebound, made both baskets after the subsequent foul, and took home their 10th championship in the past 11 seasons.

“Chris, right down the middle, nine times out of 10 he makes that layup,” Escoffery said. “It’s tough, but we’ll grow and learn and get it together. We’ll graduate these guys and they’ll go to college, university or apprenticeship and that’s the end result when it’s all said and done.”

Middlefield won three tournaments during the year and went 8-0 in the regular season, including a victory over Vaughan in December. Those accomplishments rang hollow following the abrupt end to their season.

“They played hard, man,” Escoffery said. “A couple of bounces didn’t go our way and we didn’t shoot as well as we usually do and they lost by four. They took free throws and hit them, and that’s where we are.”

While the Silver Hawks came up short of their ultimate goal this season, Escoffery knows that the pain his team feels after the championship loss will ease in time.

“I told them at our team dinner (before the game) that I’m beyond proud of them,” Escoffery said. “OFSAA’s going to happen and social media is going to remind them that they were supposed to be there. When the dust settles and the feeling goes away, we’ll come together again and they’ll realize how proud of them I am.”

“I almost started crying … because of how happy and proud I am of them,” he added. “I told them that there’s no other group of guys I’d rather be in this position with.”