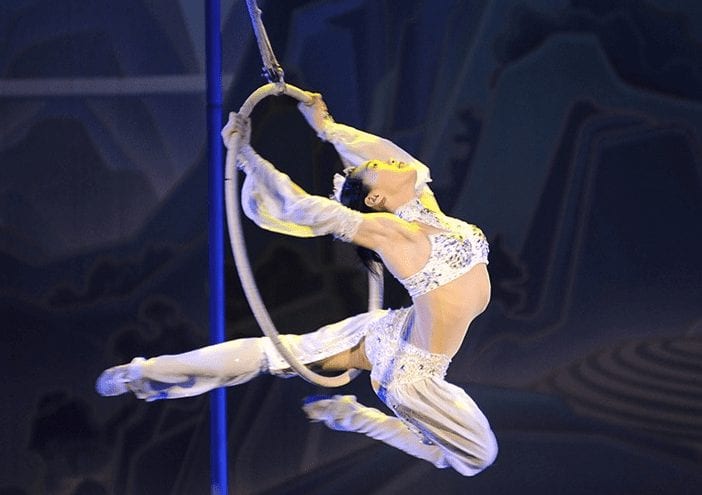 The Shanghai Acrobats of the People’s Republic of China bring a night of mind boggling acrobatics and gravity defying dance to the stage at Flato Markham Theatre this month. With three shows in two days, including a Satuday matinee, the award-winning troupe promises pageantry, precision, beauty, balance, spins and, of course, spectacle.

This current tour sees the debut of their newest piece, “Shanghai Nights”. A tale about a boy who falls asleep and finds himself in a dream in which he sees a beautiful fairy phoenix flying over the sea. The dreaming boy is attracted by the beauty and runs into the water not thinking of his safety.

What follows is a dream inspired fairy story with singing birds, clowns, fairies, a palace of fantasy and the spirit of good at odds with the forces of evil. This dreamscape is somehow played out in front of the audiences wide-awake eyes in three thrilling dimensions.

Throughout the show, the emotions and actions of the characters are translated into energetic and eye-catching acrobatic feats. A strongman tosses vases in the air and catches them with his neck muscles; a person climbs a 40 foot tower of balanced chairs and poses atop them; jugglers on rolling planks kick bowls (yes, bowls) onto each other’s heads while juggling various items and women stand 20 feet tall in glowing dresses reminiscent of Disney World’s Electric Parade while spinning dozens of plates between them.

This unique and revered art form can be traced back thousands of years to the customs of ancient Chinese dramatic folk artists who used objects from daily life to entertain and engage their audiences. Since the 1980s, the Acrobats have traveled to more than 30 countries and not only introduced Chinese acrobatic and circus art to the world, but also promoted friendships with the peoples of various countries.

As one of the most influential troupes of its kind in the world, the Shanghai Acrobats have been consistent winners at world-wide acrobatic competitions since 1959. They’ve also appeared as regulars, in recent tours, with Ringling Brothers and Barnum Bailey Circus, Mystere of Cirque du Soleil at Treasure Island Hotel & Casino in Las Vegas and with Stardust World Christmas circuses in Europe.

“Our theatrical events at the theatre are a wonderful family gathering; bringing our community together,” adds Lariviere, “This production is certainly a must see.”

Shanghai Nights evening performances takes Nov. 25 and 26 at 8pm and the matinee performance is on Nov. 26 at 2pm. Visit www.markhamtheatre.ca for more information.