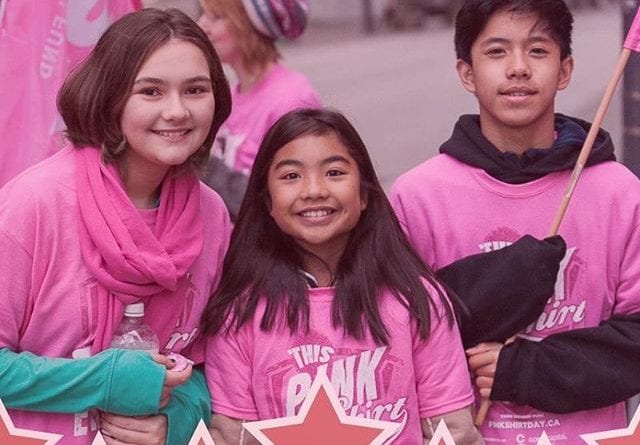 The event was inspired by an incident in Nova Scotia in 2007, when two teenagers noticed a gay student in their school was being bullied, due to the fact he was wearing a pink shirt. The two students stepped in, yet realized there was much more they could do to raise awareness of bullying. They took it upon themselves to buy and wear pink shirts to school, as well as encouraging other students to do the same, in solidarity with the bullied kid. The movement caught on throughout the school.

“Participating in initiatives like Pink Shirt Day is an opportunity … to come together and demonstrate that bullying is not tolerated in our system,” said Dale Brusselers, York Region District School Board communications specialist. “Creating safe, inclusive and caring school environments are of the utmost importance.”

In terms of involvement, he says the schools are encouraged to participate by sending out communications to families that speak to the importance of Pink Shirt Day and encourage students to wear pink.

“Schools will also engage in a number of different activities that include assemblies on bullying awareness, displays of support, pledges of acceptance or pledges to help end bullying, as well as anti-bullying classroom activities,” he said. Activities vary depending on the school.

One in five students are bullied, according to organizers of the International Day of Pink. That takes various forms, such as physical bullying, verbal bullying, social bullying, cyberbullying. It also includes discrimination based on age, race, ethnicity, religion, sexual orientation or disability.