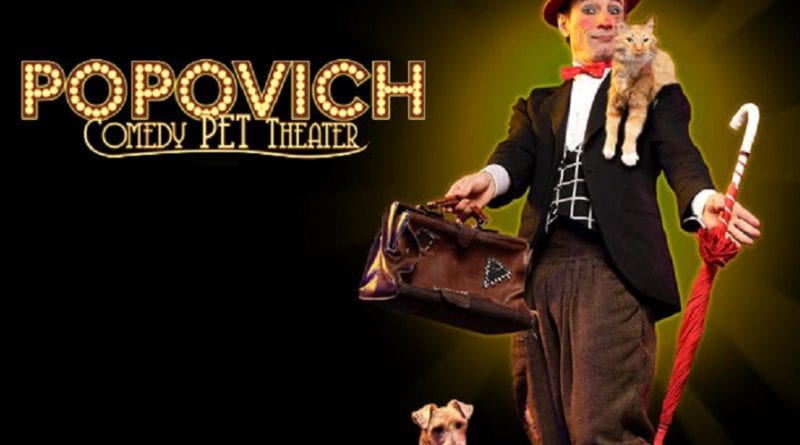 The world-famous Popovich is a fifth-generation Russian circus performer who learned early on how to develop strong bonds with animals.

Popovich Comedy Pet Theatre has been voted best family show in Las Vegas and a finalist on America’s Got Talent. Featuring an amazing cast of housecats, dogs, parrots, geese and mice, it’s a one-of-a-kind blend of comedy, world-champion juggling and the extraordinary talents of more than 30 performing pets.

Gregory Popovich has rescued the animals from shelters across the country and, using positive reinforcement and working with the animal’s natural abilities, has transformed them into Las Vegas stars.

In 1992, he was invited to be a featured performer at the Circus Circus hotel and casino. While practising for the show, he and wife, Izolda, who was also a performer, decided to use their family kitten, Snowbird, in his clown act. The audience response to the kitten act was consistently so great that he began to think about building an entire routine based on performing cats. Now, it was just a matter of finding the right ones.

A friend encouraged him to visit an animal shelter to look for cats that could become the additional performing pets. Upon his visit, he was dismayed and stunned to see so many animals without a home or a loving family, animals that had so much potential, but had been discarded. He began to adopt and train cats from the shelter and, when they were ready, he introduced them as a part of his show. This venture eventually became the “Cat Skills” act.

His goal is to educate people to the concept that every animal is unique and people have a great responsibility to their pets. Both professionally and personally, he strongly supports and promotes adopting an animal from shelters and increasing participation in the practice to spay/neuter cats and dogs. Through his show and personal endeavours, he hopes to enlighten people and increase awareness of the important role that humans play and the huge difference that one caring person can make to the animal world.

In support of animal shelters, sanctuaries and organizations, Popovich continues to participate in fundraising events, community awareness initiatives/programs and cooperative opportunities in local and national communities.