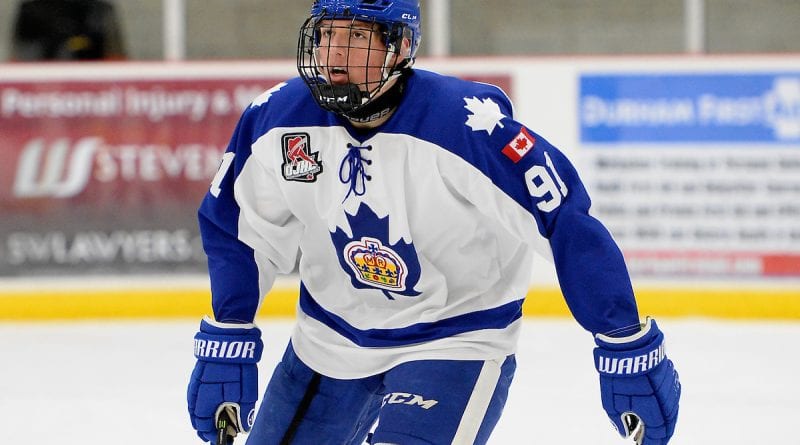 Less than a year ago, Christos Rodis didn’t know much about NCAA hockey. Now, he’s setting up to play for a former NHL coach with a top-notch, Division-I squad.

The Markham Royals rookie has parlayed a great Ontario Junior Hockey League first year into an exciting future after committing to the Western Michigan Broncos for the 2020-21 season.

“I couldn’t be happier to be committed to such a great school,” Rodis said. “It’s amazing, especially since they’re ranked (among college hockey’s top-15 teams this year). Looking at the school, atmosphere, campus and everything, it’s such a prestigious school and I’m so honoured to be committed there.”

After playing midget triple-A for the Toronto Jr. Canadiens last year, the Markham native got the opportunity to suit up for his hometown junior-A squad this season, and Rodis has loved the experience.

“It’s been great,” he said. “Coming into such a great organization like Markham has been really amazing. The group is great and the coaching staff is great. You really need to have a good team and good group of people around you to be able to come in and be successful, and I feel like that’s how my year has been going in Markham.”

Rodis has contributed at both ends of the ice this season for the playoff-bound Royals, and has been one of the top goal scorers for Markham this year.

“I’ve always been a player who likes to get around the net and score goals and produce points,” Rodis said. “I feel like, coming into the league, you just try to do all of the right things, get to the net and try to produce. Scoring goals is something that comes to me and, ultimately, when I have an opportunity to score, I put it in the back of the net. But I always try to focus my game towards being a 200-foot player. I’m just lucky enough to have the ability to score goals as well.”

The strong, two-way play against much older competition was what brought attention to Rodis from a number of schools, including Western Michigan.

“Being a school from Michigan and one that had the history was as prestigious as it is,” Rodis said. “And, a coaching staff run by Andy Murray was something I really liked. They called and got to know me well and told me they wanted to get to know the player and their work habits, but also their family. I really liked that about them. We started talking and a few weeks in, associate head coach Dave Shyiak came to watch me at practice. We talked after and he said he wanted to get to meet me face-to-face. We had some small talk, going over some strengths and weaknesses in my game and what I can improve on, stuff like that.”

A couple of weeks later, Rodis received a call from Murray, the Broncos head coach who spent nearly two decades behind an NHL bench.

“It’s truly special,” said Rodis, who was excited to receive the call from Murray. “That entire coaching staff is so prestigious and to be in talks and get feedback and establish a relationship with coach Andy and coach Dave and coach Todd (Krygier, a former NHL player), is just phenomenal.”

Shyiak was Rodis’s main contact point and he let the Grade 12 St. Brother Andre student know they were closing in on a decision for who to offer a scholarship to. Rodis didn’t have to wait long to find out the results.

“The next night, I got a call from my advisor, letting me know that I had gotten an offer from Western Michigan,” Rodis said. “Instantly, I called my parents and told them.”

It didn’t take long for Rodis to decide on his future.

“I called coach Andy Murray about 15 minutes after that, telling him that I was very honoured, thanking him for the opportunity and that I was committing and was going to be a Bronco,” Rodis said.

Rodis credits the Royals organization with helping him to improve to the level where he has become a Division-I prospect.

“The guys and the coaching staff here in Markham have been great,” Rodis said. “Everyone reaches out and helps in many different ways. Mike Galati, Brad Watt and Spencer Hyman have been great throughout the entire year, pushing you every day to get better. They give you systems that work and they teach you new gameplans, they provide film and tips to get you better every day and give you a chance to succeed.”

His veteran teammates have taken him under their wing this season, something Rodis truly appreciates.

“We don’t have an old group, but we have a few vets who have really helped me,” Rodis said. “Guys like Alessio Luciani, Braedyn Aubin, Devyn Mayea, they’re always there for you. I went through a bit of a slump earlier in the season and went to them for advice. They said it was growing pains, that this stuff happens and you’ve got to find ways to get out of it and you do eventually. Being around all of the guys every day, it feels like a brotherhood and you work for each other. That’s a big reason why we, as a team, have prevailed this year and why I myself have been able to find success.”

Photo: Christos Rodis has had a great rookie season for the Markham Royals, and has committed to play university hockey for the Western Michigan Broncos in 2020. Shawn Muir photo.