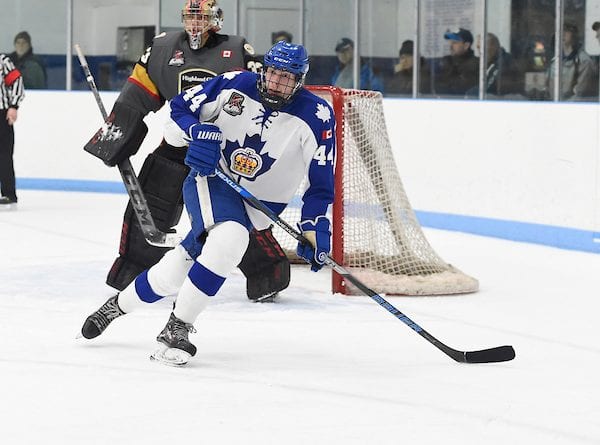 Expectations have remained high for the Markham Royals this year.

With veterans departing and new additions finding their way into the lineup, it’s been a good chance for the defending North Division champions to see what they’ve got.

The Royals are looking to make a statement in the Ontario Junior ‘A’ Hockey League (OJHL) once again in 2019/20.

“Obviously, with the type of season we had last year with winning the division and going all the way to the conference final, that’s a goal again,” said Royals general manager and head coach Mike Galati. “With a lot of returning players from that team, going one step further is obviously something we’d like to do.”

Markham has added some exciting pieces this year it expects will make some significant contributions.

“We have a lot of guys returning from our team last year and the pieces we brought in, we hope they’ll be difference makers,” Galati said. “We brought in (Vincent) Bonaiuto, who’s been a point-per-game guy in this league already, and we brought in (Nick) Abbott, a Division-I commit who will be looked upon to do some real good things. Same with (Dominic) Della Civita and (Kevin) Weaver-Vitale, experienced guys that we hope can make a difference.

Some of the new faces have already been entrusted with key roles, as Della Civita has been named the captain of this year’s club, with Bonaiuto, Giunta and Rosborough serving as alternates.

One of the keys for this group will be to keep the cohesion from last year’s team, a critical factor in their run to the Buckland Cup semifinals.

“I like the guys we have,” Galati said. “We’re a couple of pieces away here from being ready, but I think we had a really good dressing room last year, and that was the key to our success. We had a good group of guys that really loved to play together and win together, and I think that’s carried over into our room this year so far.”

As much as Markham would love to come out of the first month of the season chock full of momentum, there may not be much to be had either way, as a sparse September sees the Royals only play seven games.

Still, Galati hopes his squad can grab points whenever they do hit the ice.

“Getting off to a good start is a goal for us,” he said. “It’s always good to win early and get your guys in the groove. We have a slow September with only five games and the two showcase games (in Buffalo), so there’s plenty of chance for rest in our first month.”

The extra practice time will afford the Royals an opportunity to try and get everyone on the same page in terms of systems and their expectations.

“It gives us time to focus on our structure,” Galati said. “It also gives our younger guys a chance to see what it’s like to play at this level and understand what it takes to be a Markham Royal.

“I think getting off to a good start is a key for any team and that’s our plan.”

Will a slow September lead to a sluggish October?

“I’ll let you know in a month,” said Galati with a laugh. “I don’t know that having (that few games) is an advantage, but we make the most of it. Having some time to practice a little more, our guys getting some more time to understand what’s expected is an advantage, but at the same time, sometimes, when you get on a roll early, you want to play more games, because your guys are feeling good.

“It’s how the schedule is, and we make the best of it.”

Andy Corneau photo – Ryan Rosborough will have an ‘A’ on his jersey this season, as the veteran has been named an alternate captain for Markham.