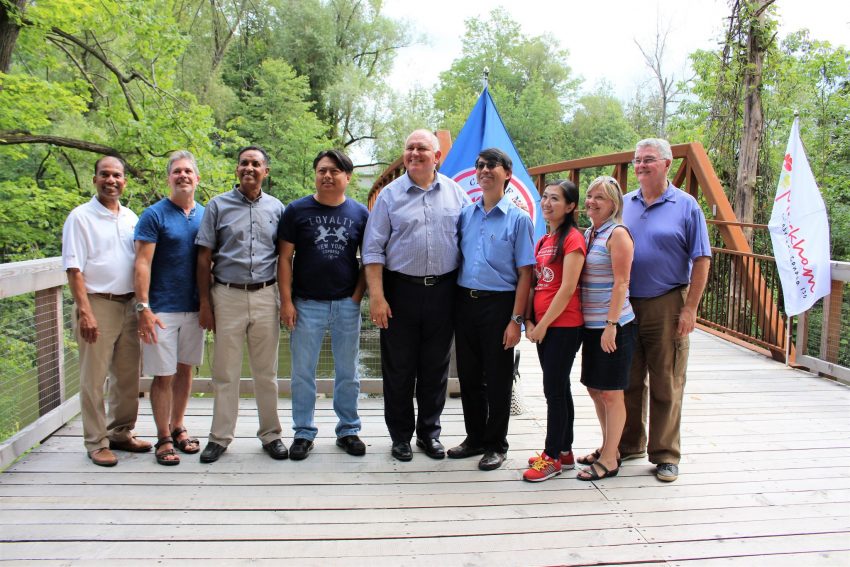 The City held their official Opening Ceremony of the Rouge Valley Trail August 12 after completing phases one, two and part of phase three of the four phase project. The opening of section 3A brings the project to 55 per cent completion.

The creation of the 15-km trail will bring natural benefits to Markham residents, making the city healthier, more enjoyable and accessible. It will better connect neighbourhoods to key locales and provide safe passage over paths, rivers, valleys and highways.

“I am very excited to see such progress as it means more Markham residents and visitors can appreciate and enjoy the Rouge’s natural, cultural and heritage environment,” said Mayor Frank Scarpitti. “I have to point out that building the trail would not have been possible without extensive public involvement, hours of hard work and consultation, and a tremendous desire to turn our master plans into reality.”

Mayor Frank Scarpitti and Deputy Mayor Jack Heath spoke at the event and were joined by councillors Logan Kanapathi and Karen Rea along with Brian Lee, Director of Engineering.

The Rouge Valley Trail project runs from 16th Avenue and Kennedy Road to Bob Hunter Memorial Park through the Rouge River Valleys and the Milne Dam Conservation Park. Residents are encouraged to use the new trail for a variety of outdoor activities like walking, running, cycling for fitness (and fun), recreation and transportation within the city.

Locations of the project are as follows:

When phase three is completed in 2018, it will connect Drakefield Road to Markham Road through the Milne Dam Conservation Park with three pedestrian bridges, a boardwalk, limestone and asphalt trails and a 143-metre suspension bridge.