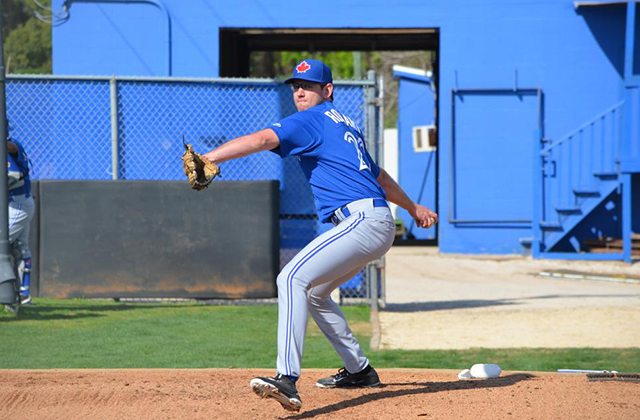 Springtime is near, and baseball in the air. For Jordan Romano, things have already begun.

The Markham native and Toronto Blue Jays prospect is in Florida, getting his first shot at being at a major-league camp following a great season playing high-A ball with Dunedin.

“That was my first full year off of Tommy John surgery, so it was definitely a process, because I’ve never pitched a full year like that before or pitched that many innings,” Romano said. “It was about listening to my body, learning my body more. I didn’t miss any starts, so that was a big success and I learned a lot of things moving forward towards 2018.”

While major-league ballplayers can spend their off-season relaxing and training, things are a little different for someone like Romano on a minor-league salary.

“I got a job at Lululemon and was there for a few months,” Romano said. “I was working out mostly in Brampton.”

While working and living with his parents in Markham during the winter, a tweet of Romano’s caught the eye of Blue Jays ace Marcus Stroman, who encouraged him to “Stay on the climb”.

“When guys on our big-league club give us encouragement or words of advice, taking time out of their day to do it, it’s special,” Romano said. “So hearing something like that from a guy like him means a lot to me.”

Once early February hit, Romano packed up his truck and did the 2,200-kilometre drive from Markham to central Florida.

“It takes about two days, so I drive a little bit, sleep in my truck and then do the rest,” Romano said.

By the time the winter had rolled around in Markham, Romano was ready to get back out on the mound.

“The off-season can be kind of long,” Romano said. “At first, it’s nice to come home, see your family and get a break, but after a few months, you start to get that baseball itch. You want to get out there and compete and see your teammates and coaches, so by now, I’m definitely ready to be out there, on the mound and with my teammates, having fun.”

Romano made a team-high 26 starts last season and did so by adding a change-up to his arsenal, which already included a fastball that touches the mid-90’s and a slider.

“That was something that was challenging for me last year,” said Romano of the change-up, a pitch the Blue Jays organization asked him to work on two seasons ago. “The first half of the year, it was tough and I couldn’t find a comfortable grip. The last third of the season, I found a grip that worked and when I got more comfortable with it, I started throwing it more and having more success.

“This year, I’m just trying to build off of what was successful last year,” added Romano, an Ontario Blue Jays alumni before pitching for Connors State and Oral Roberts in college. “I’m going to try to throw it more this year and build off of last year.”

The big right hander is hoping to once again move up through Blue Jays minor-league system this season, with the double-A New Hampshire Fisher Cats, two rungs below Toronto, being the next squad in the ranks.

“Obviously, I have goals like anyone else and I’d love to start in ‘AA’, but as a baseball player, we don’t make those decisions,” said Romano, who grew up a big Blue Jays fan and made frequent trips to the Rogers Centre as a kid. “It’s up to our front office, but personally, I’d love to start the year in double-A.”

No matter where he winds up pitching, though, he’ll have the support of his family.

“My parents came down (to Florida) during the season (last year) and it was pretty good, because they actually got to see two of my games and I pitched pretty well, so it was awesome to have them in the stands, watching,” Romano said. “Having them down there, going out to eat with them after the game, talking baseball, it was great. Markham’s pretty far away, so it was great that they could make the trip down there.”

There has been some discussion among the baseball ranks as to whether Romano projects as a starter or reliever at the major-league level. He’s hoping to remind everyone that he’s got the goods to make it to Toronto and do so as a starter.