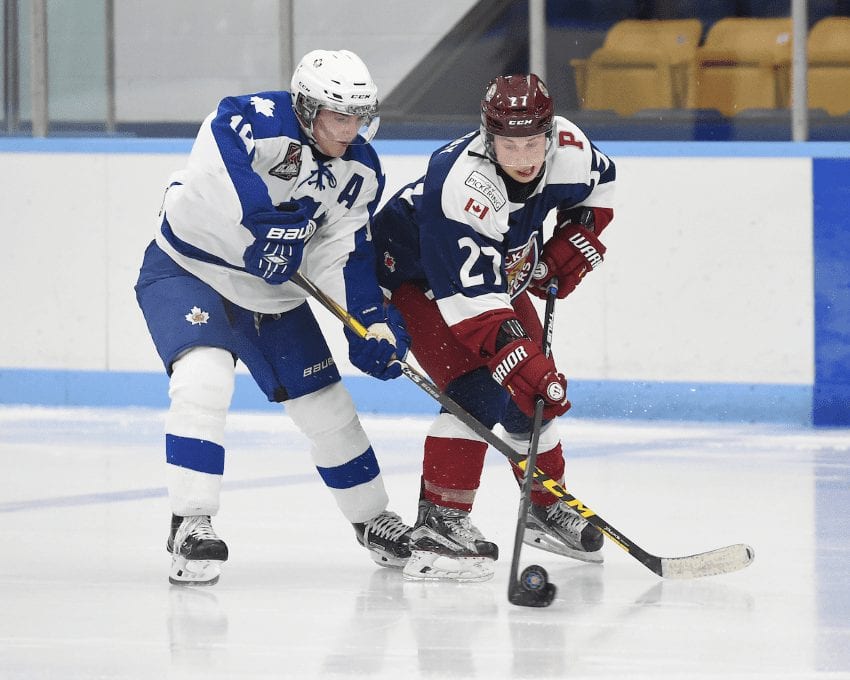 After unveiling their 2015-16 North Division Championship banner in a pregame celebration, the Markham Royals continued the party with a 4-1 win over the Pickering Panthers on Sept. 16 at Centennial arena in front of hundreds of Markhamites.

The win was Markham’s second of the season, their first on home ice, against a very young Panthers squad that held their own against the more veteran Royals lineup.

“We knew they were going to work hard,” said Royals head coach Mike Galati after the game, “They are a real young and eager group that’s got some skill and speed. There were times where they outworked us.”

After a scoreless first period of play, the Royals finally found a way past Panthers starting goaltender Graham Schropp thanks to Doug Carter scoring against his former team. He followed that up by assisting on Corey Iapalucci’s second goal of the season to give the Royals a 2-0 lead. Before the second period came to a close, another former Panthers found the back of the net against his old club, this time it was off the stick of defender Kyler Challis. Hudson Michaelis scored the 4th goal in the third period, before a power play goal from Panther’s Davis Teigen-Katsumi broke the shutout bid for Royals starter Marcus Semaio.

The Royals then travelled to Lindsay on Sept. 18 where they crushed the Muskies with a 6-2 win. Conor McCollum was quite unstoppable in net, saving 35 of the 37 shots.

The winning streak continued back at home on Sept. 23 when the Royals ended the game 5-3 against the Aurora Tigers.