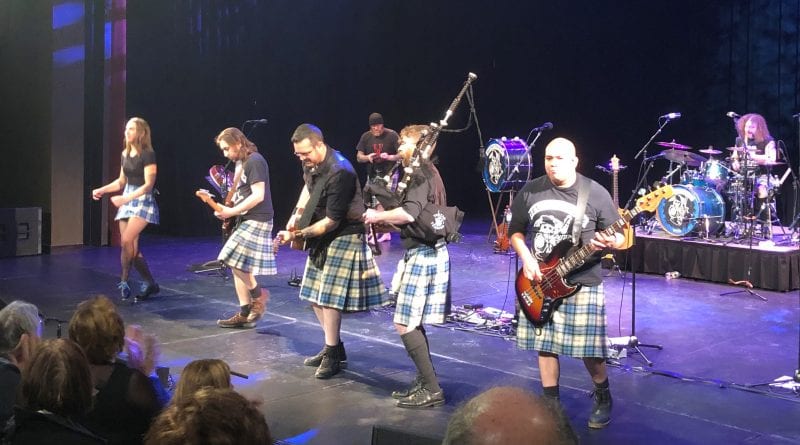 It may lack the commercial intensity of St Patrick’s Day, celebrated by Irish and wanna-be Irish, but there’s no denying the Scots, a peculiar lot in some ways, are no less proud of their favourite son, the Bard from Ayrshire, Robert Burns, born January 25, 1759.

While many non-Scots would see the day of Burns’ birth pass uneventfully, hundreds of thousands of Scots, part Scots and wanna-be Scots gather the world over in pubs, community halls, church basements and anywhere else that allows loud bagpipes, haggis and drink.

This year, among other places, the event was rung in locally at  the Flato Markham theatre where 500-plus stomped their way through a rollicking set by Canadian-Scottish troupe the Tartan Terrors (pictured) and at one of Unionville’s best know local, the Unionville Arms, where a sold-out crowd arrived for a traditional “Rabbie Burns dinner,” which included the piping in of the haggis, a traditional Scots dish, that tastes just fine thank you, but lacks visual appeal in many estimations.

The presentation of the haggis, usually complete with a rendition of one of Burns poems the Address to the Haggis, that celebrates the “great Chieftain ‘o the puddin’-race,” a knife waving Scotsman and all washed down with a dram of the “uisce beatha” or water of life, also known as Scotch whisky.

The Burns’ story as national hero is an unlikely one given that he came from modest means, lacked much formal education and lived a scandal-ridden life that ended prematurely at age 37. But he became well respected in his time as a free-thinking man who’s legacy includes celebrations of Scottish life in verse as well as biting political commentary such as writings against the slave trade that riled some of the establishment of the day.

No tribute to Burns without a rousing rendition of Auld Lang Syne, the well-known song most know from New Years Eve celebrations. And that is exactly how the Tartan left the stage at Flato – kilts flying, pipes raging and a full house on their feet, giving one last ovation for all things Scottish – until the next excuse to celebrate.

Main photo: The Tartan Terrors on stage at the Flato Markham Theatre.