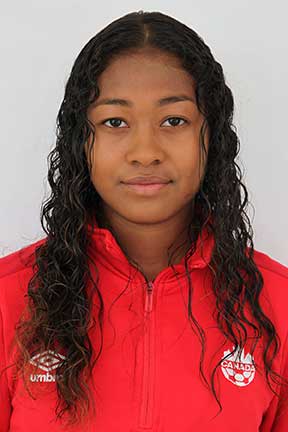 Jayde Riviere picked up some of the biggest caps of her career on the world stage.

The Markham native played in three of Canada’s matches this month at the FIFA Women’s World Cup in France.

One of the youngest players on the squad at 18 years old, Riviere did not compete in Canada’s opening match, a 1-0 victory over Cameroon.

But five days later in Grenoble, Riviere made her first ever start and appearance at a senior World Cup, playing right back against New Zealand.

She was subbed out in the 75th minute and was part of a clean sheet in Canada’s 2-0 blanking of New Zealand.

Riviere would come off of the bench in the next two matches, entering in the 69th minute against Netherlands for veteran Allysha Chapman.

She would also come on in the 84th minute of Canada’s Round of 16 contest versus Sweden, taking over once again for Chapman in a bid to add offensive firepower late in the match, one the Canadians would lose 1-0.

Riviere, a Markham soccer grad, has now earned eight caps with the senior side.

Concerns about the carbon footprint

Climate change was one of the most contentious issues in the 2019 federal election. Canadians are clearly concerned about the