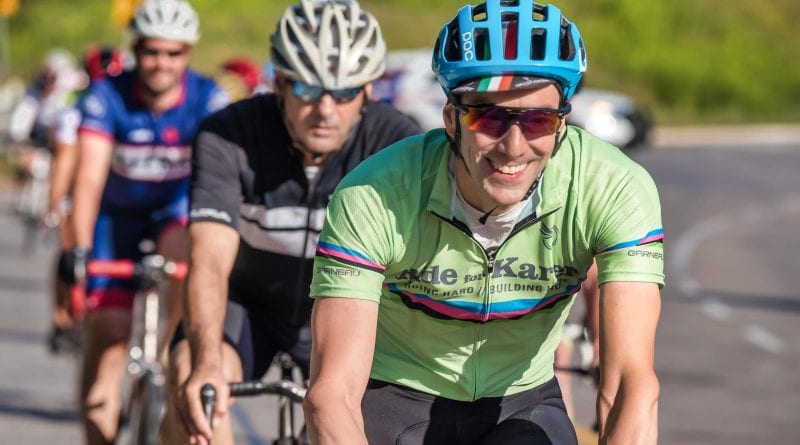 Kris Tobias was looking for an outlet, a release after his mother’s passing.

What began as a chance to do some cycling with his brother and some friends became an annual fundraising event that has collected well over $2 million in almost two decades.

The Ride for Karen, a charitable bike ride that raises money to send kids with cancer to camp, began back in 2002 with an idea.

“My mother, Karen, died that year in the summer after battling breast cancer for five years,” Tobias said. “I had been a cyclist for some time. I raced, I rode mountain bikes, I just loved to ride. At the time that my mother passed away, that young at 53, I said to my brother Kirk, who wasn’t a cyclist, that we should gather up some people and go for a ride, because exercise is a catharsis.

“He was the one, he’s the marketing brains, who said that if we’re going to do that with people, why don’t we do something more formal, and raise money in our mother’s name?” Tobias added. “I thought it was a great idea.”

This summer’s version of the event, which was headquartered in Markham but began and ended its course in Stouffville, had both a 100km and 160km option for its 150 riders.

The proceeds from Ride for Karen go to one of a trio of camp experience providers in Ontario.

“There’s Camp Trillium, Camp Quality and Camp Oochigeas,” Tobias said. “For the most part, we’ve funded a variety of programs there. One of the interesting ones we’ve been involved with for some time is Ooch on the 8th, it’s on the eighth floor of the Hospital for Sick Kids, where they treat cancer patients.

“The camp is a state of mind,” Tobias added. “You don’t have to go on a bus somewhere for it. Ooch on the 8th gives that experience to day patients and those that are there for longer for a variety of reasons. They do the things that go beyond what the medical system does and make that kid feel like a kid. That’s really what all of this is about.”

When it comes to setting things up each year, the Tobias brothers and a number of volunteers work to make sure things are ready to go.

“In terms of putting the event together, we’ve obviously got to plan out some routes,” Tobias said. “There’s planning it out, signing the course, and getting your website ready to go. These days, fundraising gets done through social media and emails, so you need to have a good website and make it easy for people to donate online and get a pdf of their tax credit.”

There are food and drink stations dotted along the course, as well as a barbecue afterwards, both of which are powered by those willing to come out and lend a hand.

“We have a huge group of volunteers that help us in the weeks leading up to the event, doing things like getting our rental vehicles, and baking all of our home-baked goods a day before the event and making our sandwiches,” Tobias said. “The idea is that it’s a family-run, volunteer-driven event. It’s kind of the opposite of the large and commercial events, and nothing to take away from those, but we’re on the other end of the spectrum.

“You can get in front of the people that started it and organized it,” Tobias added. “My brother and I have always ridden in the event. That part is very important to us because the support of our families and volunteers help make this happen.”

That includes some of the survivors who have had a chance to experience some of the camps.

“We’ve had them come out and volunteer, and kids have come out and spoken to the riders about their experiences at the camps,” Tobias said. “It’s very important for us to use the opportunity of having those folks in front of us to build their desire to continue to do the work of fundraising for the camps.”

The Ride for Karen continues to be a special day for Tobias.

“I think it puts meaning to us to what was a very difficult loss, and it helps us heal,” he said. “It keeps our mother’s name alive in many ways. Every time we have the event or when we’re out riding and are wearing clothing that has Ride for Karen on it, somebody asks who Karen is and we get to explain. It keeps her memory front and centre, which I think really helps both of us.

“I kind of look at this event and it proves that anybody, if you’re passionate about something, you can make a difference,” Tobias added. “There’s no secret sauce to this other than putting one foot in front of the other, and it’s taught us and our families how important it is to give back.”