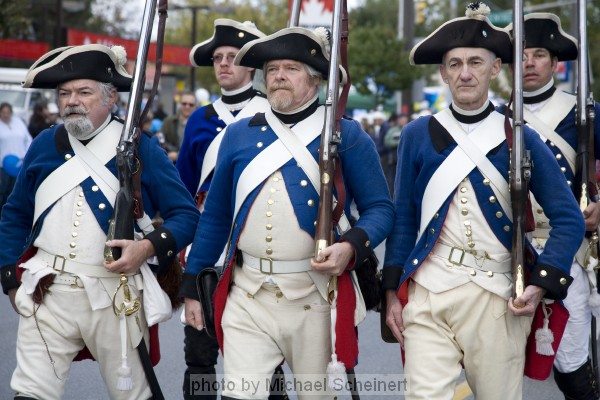 The smell of gunpowder will be in the air, and armed soldiers on the streets of Markham this month. You needn’t fear, however, as the King’s Royal Yorkers are on our side.

It’s been 240 years since the American loyalists fought alongside those who would later become Canadians in British North America—part of a chapter of history many today have forgotten. Not so for the planners of the Thornhill Village Festival, who will be welcoming back the King’s Royal Yorkers as part of the 41st iteration of the festival on Sept. 16.

The event will once again be held in Old Thornhill, closing down Yonge St. between John and Centre streets.

“It’s quite a show they can put on,” said festival publicity chair David Rawcliffe. “It’s not only the show—they do a very good job of explaining what’s going on so somebody who doesn’t really know the difference between a musket and a rifle can enjoy it…. There’s an education part to it which people find informative.”

For Thornhill, the former village that includes parts of Markham and Vaughan (with Yonge as the boundary), the festival allows for a neighbourhood feel that is often hard to find in modern urban life.

With 2017 being the year of Canada’s sesquicentennial, Thornhill’s and Canada’s history are particularly on display at this year’s festival, according to Rawcliffe.

Looking to the past is only one part of the programme, however.

“The festival’s got history in it, but it’s also a major crafts festival and has community groups. There’s also music, and it’s pretty eclectic,” Rawcliffe said. “So you don’t have to be interested in history to come along to the festival.”

Rawcliffe, a long-time festival volunteer who has chaired the event in years past, said his favourite component—and indeed the part that sets it apart for attendees—is the community spirit the festival fosters.

“I think the core of it is seeing the community together,” he said. “That’s when people really do enjoy it. We look forward to seeing people in the streets, people meeting each other, and people getting together. Whether they’re going to lunch, visiting St. Volodymyr’s (Ukrainian Catholic Church), going to Holy Trinity (Church) to listen to some music, taking their children around, or stopping to see the King’s Royal Yorkers.”

The festival is put on by the Society for the Preservation of Historic Thornhill, with the hope of fostering a community spirit, but also keeping Thornhill’s uniqueness alive.

With the region’s increasing ethnic and cultural diversity, Rawcliffe said reaching out to various communities has becoming increasingly important in the festival’s growth.

The overarching goal, Rawcliffe said, is that people in Thornhill and the surrounding neighbourhoods know the festival is one for everyone.

“This is a community festival,” he said. “It’s not linked to any specific ethnic or religious group. The heart of it is the Thornhill community.”