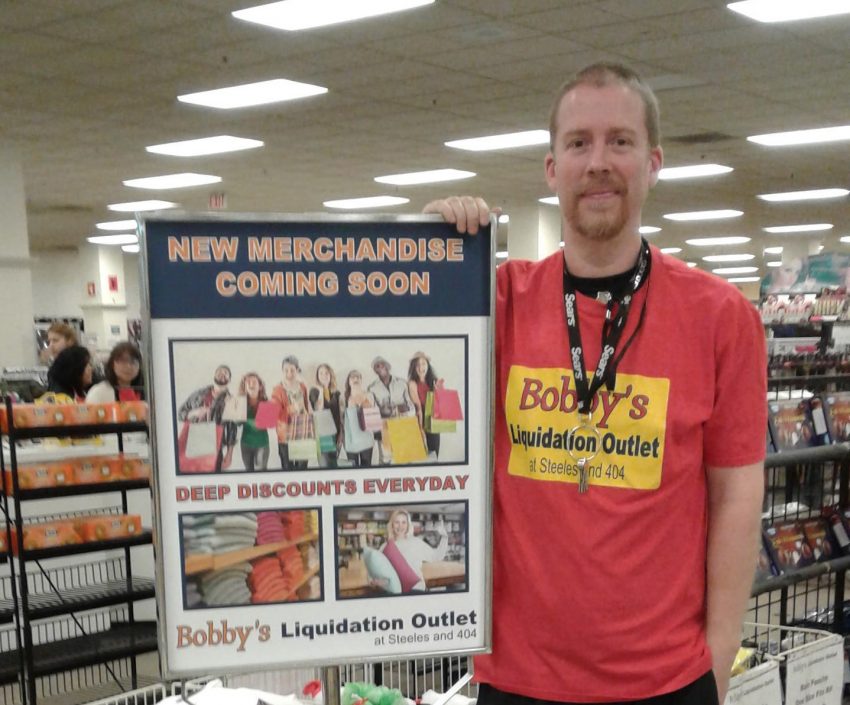 What do you do when your largest retail customer goes bankrupt and you have thousands of items in inventory to unload?

If you’re like several former Sears Canada suppliers, you take matters into your own hands. In an effort to turn “lemons into lemonade,” a group of 25 Canadian companies have come together to open a 150,000-square-foot, two-story mega liquidation centre in Markham where the Sears store once stood at “Shops on Steeles,” just west of Highway 404. The plan is to sell their orphaned Sears inventory direct to the public at deeply discounted prices.

Bobby’s Liquidation Outlet is selling merchandise in every category that Sears once sold, from clothing, accessories, leather goods and jewellery to toys, bath, bedding, kitchenware and home decor items, with the exception of appliances. Several non-Sears suppliers have also come on board, offering end of lines, overstocks and discontinued brand name clothing – including pieces from Armani, Columbia Sportswear, Dolce & Gabana (D&G), Gucci, Cavalli, Moschino and Dsquared – at bargain prices.

The outlet also features a 3,500-square-foot “Antique & Vintage Market,” selling thousands of pieces of antique and vintage furniture, lamps, appliances and jewellery at below market prices.

The main floor of the outlet officially opened in late November with the second floor set to open in December with more merchandise at blow-out-prices.

Bobby’s Liquidation Outlet is the brainchild of Ari Starr, who was one of Sears’ former suppliers through Concord-based Zenex International. “Aside from the tremendous pain to employees, pensioners and vendors who have lost millions of dollars as a result of Sears’ bankruptcy, customers have lost a reliable source of high quality merchandise and many vendors lost their largest customer,” Starr said, adding that the new outlet – which has hired many ex-Sears employees – offers a win-win solution.

The outlet is named after Starr’s brother, Bobby, 62, who has developmental disabilities. In honour of Bob – who loves the idea of having the store named after him – a portion of the outlet’s profits will be donated to organizations that provide support and programs for people with special needs, including Thornhill-based DANI, Yachad and Reena, of which Bob is an active client, and the Markham-based Spirit of Life, which assists those with developmental disabilities in the Chinese community.

In partnership with Yachad, The Canadian Jewish Council for Disabilities – a non-profit organization that is dedicated to promoting inclusion for people with special needs – Bobby’s Liquidation Outlet will offer work placements throughout the store for Yachad participants, including such roles as store greeters and merchandisers. The outlet has also designated a room in-store for Yachad-run activities such as gift basket-making, snack concession and food preparation for the retailer’s staff.

Sample bargain prices at Bobby’s Liquidation Outlet include $9.99 for Sears’ Jessica Brand dresses, $59 for Columbia Sportswear winter jackets, $49 for designer jeans from D&G, Gucci, Dsquared, 40-50 percent off socks and undergarments, $14.99 for a four-piece set of twin or queen sheet sets ($15.99 for king sets).

“We’re thrilled to be back in the community and serving former Sears customers,” said store manager Tyler Bonham, who was previously employed by Sears in the same location. “Customers recognize us and are so happy to see us back at work doing what we love.”

In addition to Bonham, about a dozen former Sears employees have already been hired to help run the outlet, with dozens of additional positions still to be filled. Those seeking employment as cashiers, merchandisers and shipping/receiving staff are asked to send their resume to the head of HR and former Sears employee Sue McDonald at [email protected].

A controversial trend is emerging in land development in Ontario, namely the increasing use of Ministerial Zoning Orders (MZOs) by