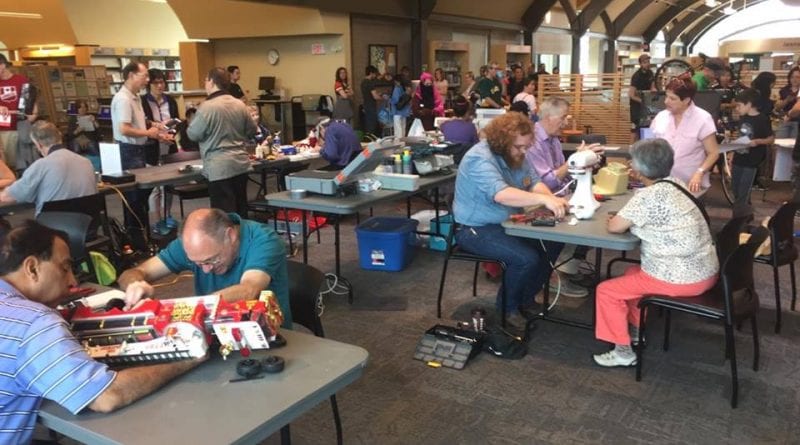 If it ain’t broke, don’t fix it. If it is, don’t toss it. That’s the spirit behind the Repair Café, the hands-on product of a partnership between the York Region government and York Region Makers, a Newmarket-based not-for-profit community engagement group.

Markham Village Library will play host to the Repair Café from 1-4 p.m. on March 17, encouraging people to bring their broken or malfunctioning items in for repair by a handy team of volunteer fixers.

It’s a free community program rather than a professional service, but one with a good track record at fixing anything from torn clothes to broken toys to vacuum cleaners that just won’t start. Volunteers can either repair it for you or with you.

Organizer Derrol Salmon, who does business development for York Region Makers, says he wants to foster an environment where things aren’t treated in such a disposable manner.

“The spirit of it is about getting to rethink something that you purchased that may be broken and try to see if it can be repaired instead,” he said. “I know it’s a challenge these days. Things that we purchase tend to be very closed (and) locked down, so it’s really a use-once-throw-it-in-the-garbage mentality unfortunately.”

For liability reasons, the fixers can’t make any guarantees, but Salmon said many of the products brought in have problems that are easily rectifiable to eyes and hands that know what they’re doing.

Due to time limitations, Repair Café’s volunteers will not handle gas-powered machinery, Keurig machines or clothing alternations, but most other items are fair game, Salmon said.

If people know of a special tool or part an item needs, they’re encouraged to bring it with them, though the café has an inventory of some commonly used pieces. Even if something can’t be fixed during the café, fixers are often able to diagnose a problem and walk someone through what they can do on their own. The educational component is a key part of York Region Makers’ mission.

“It’s a great way for the transfer of skills,” said Salmon. “There’s a lot of learning opportunity in this. Science, technology, engineering and mathematics (STEM) education is massive in schools. What better way to teach STEM than through something very hands on—repairing stuff. It’s a life skill, learning to do things for yourself. It’s very empowering.”

The expendability mindset the event tries to combat often comes from people simply not having the technical know-hour to repair things. Salmon noted there is a distinctive generational gap, as well.

If you’re on the handier side, the Repair Café would welcome you as a volunteer, Salmon said, noting it can be just as fun to fix something as to have it fixed.

“There’s nothing better than fixing something that someone had in the back corner for a length of time,” he said. “And when it’s fixed, there’s a smile and there’s a delight in the fact that this thing was fully unused and now is back.”