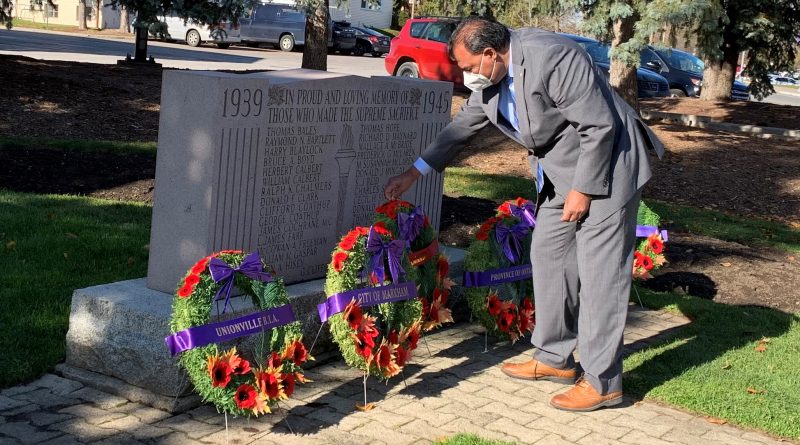 Seventy-five years ago, the second world war came to an end. There are only a very few WWII veterans remaining to remind us of the suffering and sacrifice they endured in that war and wars previous.

But there are still those among us who served after the old guard in conflicts and peace-time since and they still keep the memories of sacrifice alive. The current pandemic did its best to stifle the memories this year shutting down the yearly parades and public observances. But still people remembered.

Thousands did participate in online acts of remembrance, including those presented by the City of Markham. Others refused to let the moment of the 11th hour of the 11th day of the 11th month – the time that marked the end of the first world war – go past without making an effort to go out in person to remember.

As the siren blared from atop Crosby Arena over Unionville, joggers stopped, construction crews paused and a long line of socially distanced people cued to place their poppy at the cenotaph on Main St. despite there being no official service. Regular people, young and old, some together and alone. Even a few dignitaries like MP Bob Saroya, Senator Victor Oh and Markham Deputy Mayor Don Hamilton made the trek to Main St.

All remembering the selfless sacrifice of those who served for us. 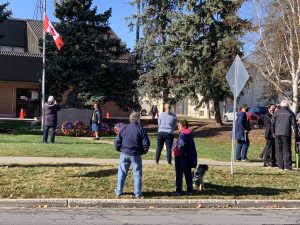 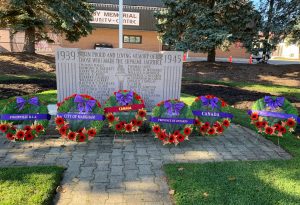