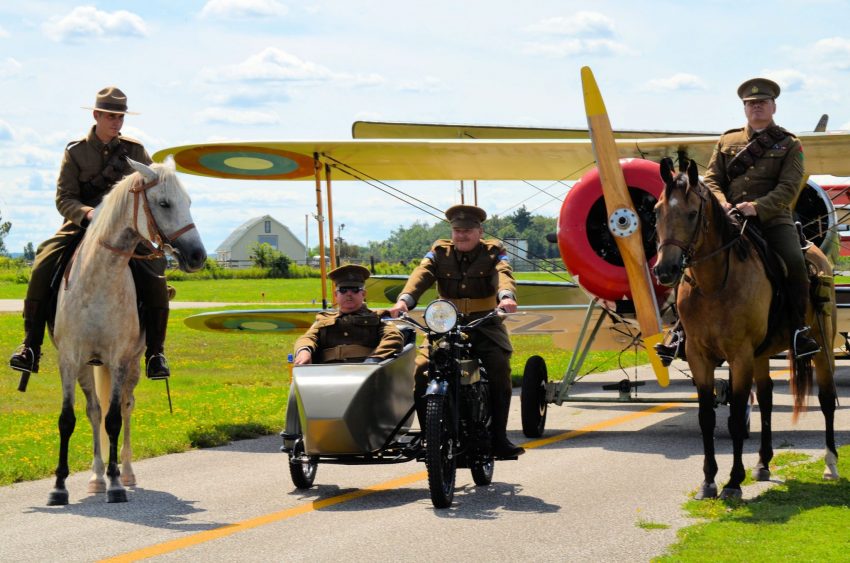 When Red (Remember Everyone Deployed) Fridays was promoted by Karen Kelly and Lisa Miller, two military wives with husbands deployed in Afghanistan, in 2006 it was a grassroots success that culminated in a 20,000 person, “support our troops rally” on parliament hill. They wanted to give Canadians the opportunity to show their gratitude to our past and present heroes, by wearing RED on Fridays. The pair has since hosted, attended and inspired countless events throughout the country and continue to spread the word about the importance of Red Fridays.

“The 4th Canadian Mounted Rifles Association is proud to now have these two talented ladies working side by side with us to reinvigorate and take Red Fridays across the country,” said 4CMRA founder Bob McTaggart.

The updated Red Friday includes first responders (police, fire and ambulance), historically many first responders have served in the military (there were 62 firefighters in the 4th CMR during the First World War), both the military and first responders are deployed (either at home or overseas). The 4th Canadian Mounted Rifles Association, a federally registered not for profit, and Mounted Rifles Management Limited, working together are committed to providing the framework for Red Friday 1918-2018 to be a huge success.

“Our goal is to honour and commemorate Canada’s 118,000 war dead while supporting the living. Stand with us! Our veterans are the ones who have had, and continue to ‘have our backs’. They are the ones who help keep peace in the world, and risk their lives when need be,” said McTaggart.

“The 4 CMRA commemorates our fallen through the use of our two replica 1917 Douglas motorcycles, with drivers in uniform for parades and national events,” added McTaggart. 4CMRA also promote living history displays such as the Mayors Vimy Concert in Markham in April, the Warriors Day Parade at the CNE, The Canada 150 Event with the City of Markham, The Invictus Concert at Roy Thompson Hall and the forthcoming Remembrance Day Parade and events in Markham with the city and the Markham District Veterans Association. In addition, they offer downloadable educational materials available to schools across Canada as part of a Vimy educational program promoted by the Royal Canadian Legion Ontario Command.

The 4th CMRA has developed fundraising capabilities that support military charities, cadets, veterans and civic organizations throughout Canada, and plan to make the three- year program financially self-sufficient. They hope to achieve financial self-sufficiency through the licensing of their brands, sales of wearable merchandise and limited- edition prints.The 4 CMRA is a federally registered not-for-profit. Robert A.

McTaggart is a former cadet and officer in the Governor Generals Horse Guards (GGHG), he founded the 4CMRA in honour of his great-uncle Fredrick McTaggart, a Canadian soldier in the 4CMR who fell at the battle of Vimy Ridge on April 9, 1917. The 4CMRA provides a present-day voice by honouring those citizen armies through living history, education, memorials, community participation, and promoting understanding of Canadian, and American, military history.

It is through what they did a hundred years ago from where we draw our inspiration, strength, and commitment to honour both them and those Canadians who stand for these values today.

Photo: 1918 military technology at the Great War Flying Museum, with members of the Hamilton Volunteer Cavalry and the 4th Canadian Mounted Rifles Association.