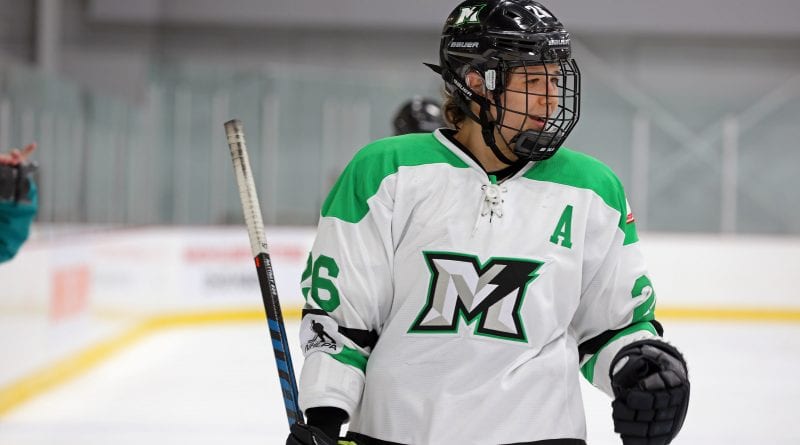 When Jamie Lee Rattray gets into the offensive zone, she’s a threat to score. The former Jayna Hefford Trophy winner continues to be a dominant force for the Markham Thunder.

Now in her fifth season with the franchise, Rattray has been a part of a burgeoning Thunder squad for quite some time.

“It’s surreal to think that I’ve been in the league for five years now, but I’ve seen the team and league really grow,” she said.

As part of the Thunder core that relocated from Brampton to Markham last year, it was a move, Rattray feels, that injected new life into the franchise.

“I think the move to Markham was great,” she said. “The city embraced it and the mayor was phenomenal in his support of the team through social media. It was a fresh start and a fresh face to a franchise that really needed it. It was pretty refreshing as a player to know that you had a new logo, new city and new team to be a part of.”

Rattray led the Markham squad to its first Clarkson Cup in a new home and was named the league’s most valuable player in the process.

“I think it’s always nice to have a season like that,” she said. “As a player, when you get going like that, it’s big for your confidence. I think I owed a lot to my teammates. We have such a great group of players here that it makes it so much easier to go to the rink and compete for one another. I really enjoyed going to the rink and being around them. It definitely did help, with me going in to work every day to try and compete and do my best.”

That strong season put her back on the national squad’s radar, as she suited up for Team Canada at the Four Nations Cup in Saskatoon back in the fall.

“I think, for me, the biggest thing I’ve learned, now as a bit of an older player now and getting some shots with the national team, is to have fun with every opportunity you get and enjoy it,” said Rattray, who also played for Team Canada at the 2015 and 2016 World Championships. “It’s very hard to get there and it means a lot when you do get there, so it’s a big thing for me.”

Up front, Rattray was joined by Markham linemates Laura Stacey and Victoria Bach. Together, the trio has been causing matchup nightmares for opponents all season long in the Canadian Women’s Hockey League (CWHL).

“I think we’re just keeping it simple,” Rattray said. “If you look at a player like Laura Stacey, she’s got so much speed, she keeps it simple and has great vision too, which is a huge asset in her game. You look at Victoria Bach, who just scores all of the time. Her offensive abilities are pretty fun to watch, and I catch myself looking at her because she can do some pretty crazy things out there. Overall, we play simple and the way we can, matching up the to Thunder identity, which is just keeping it simple and grinding it out. We get along really well off of the ice, too, so that helps, for sure. It’s been tough for me to keep up to them, they skate so fast sometimes, but it’s a lot of fun.”

Rattray has no plans to slow down and, since she’s not positive as to whether her future will include more games with the national team or simply the Thunder, her attention remains with the latter.

“I think I’m just keeping my focus one week at a time,” she said. “Especially with the playoffs, it’s all about keeping it with the Thunder. I’ll take the opportunities as they come and just enjoy the moments. Who knows what will happen? As an athlete, I’ll just put my head down and work hard and just enjoy it, especially with Markham, who I love to compete with every day.”

Photo: Jamie Lee Rattray continues to be an elite CWHL player, now in her fifth season with the Thunder. Teri Di-Lauro/CWHL photo