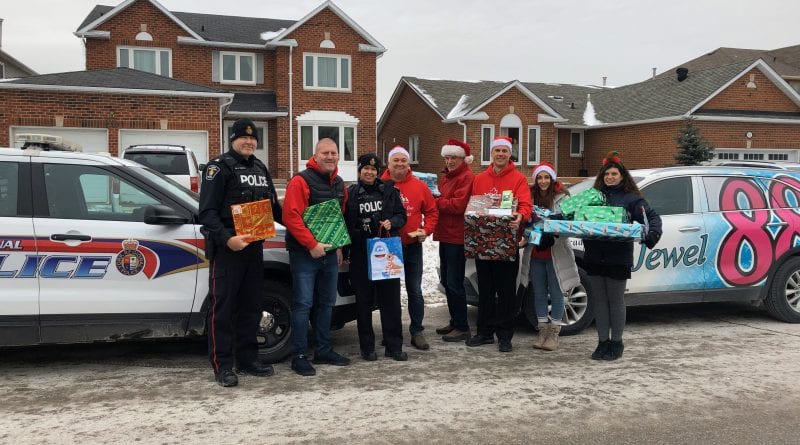 This holiday season will be a bit brighter for people in York Region.

Over the past two weeks, York Region Police Association (YRPA) in partnership with the Jewel 88.5FM radio station were on the road surprising families and individuals with much-needed gifts and financial support as part of Random Acts of Christmas.

“Our uniformed and civilian members of York Regional Police Association wanted to do something special this holiday season and make a difference in the communities we serve,” said Todd Sepkowski, President of York Regional Police Association.  “Random Acts of Christmas is our way of giving back to York Region, and helping to deliver some festive cheer this holiday season.”Throughout November, YRPA and Jewel 88.5FM asked members of the public to nominate families or individuals in their community who might need a helping hand in the spirit of the holiday season.

Both YRPA and Jewel 88.5FM were overwhelmed by the number of nominations they received and the many accounts of York Region families and individuals who were facing hard times or struggling to make ends meet.

But with the help of YRPA uniformed and civilian members along with some great local businesses, the Association was able to provide 12 families with much-needed gifts.

“Perhaps even more so during the holiday season, the simplest of acts of kindness can have a positive effect to change someone’s life for the better,” said Sepkowski.  “We hope that we have helped to bring some Christmas cheer to York Region residents who needed it during this time of year.”

Photo: York Region Police Association in partnership with the Jewel 88.5FM radio station were on the road surprising families with much-needed gifts as part of Random Acts of Christmas.