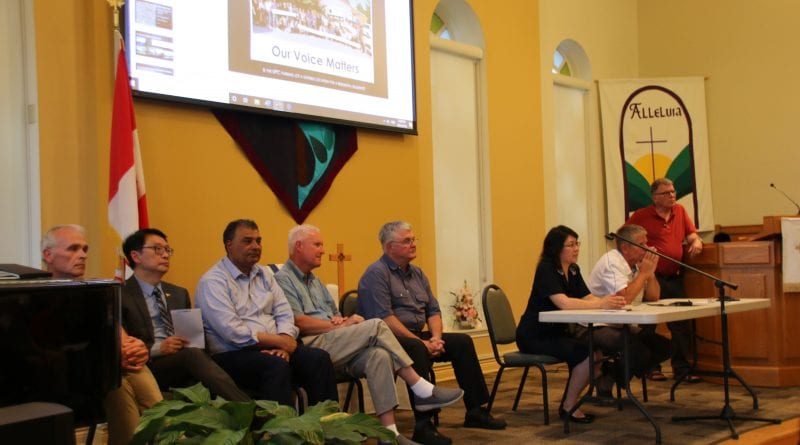 When the Making Markham Age-Friendly Committee presented recommendations a few months ago, it proposed a grand plan to make the city more livable and affordable for seniors and suggested taking otherwise unused land such as parking lots  at shopping malls, churches and other open spaces and building affordable senior residences.

After all, who doesn’t want a senior as a neighbour?

They’re responsible, not too loud and don’t cause much trouble as a rule.

So, it must have come as quite a surprise when a proposal by Unionville Presbyterian Church to do just that was met with a wall of anger at a recent overflow meeting with mostly local community members who wanted nothing of the sort for the still- quiet Village Parkway location.

Billed as an information meeting, it was clear by halfway through that most in the audience were in no mood for information and were intent on shutting down the church sponsored plan, heckling supporters and assembled politicians with seniors and good intent be damned.

It was not pretty at times.

However, invective aside, several more level-headed speakers did offer legitimate concerns for the project including the appropriateness of the location given the small amount of developable land, the lack of amenities within walking distance, poor bus service on the road and the elimination of parking spots that outside of church hours are used by residents to access Carlton Park which is adjacent to the parking lot.

In addition, questions involved whether the units would be owned, rented and to whom – local or people from away or people with mental disabilities while others noted traffic congestion in addition to that already imposed by commuters using the Parkway as a north-south route to work, local schools and condos at the south end of the street near Highway #7.

“Where is the most appropriate place to situate affordable housing?” asked Neil Martin, a local resident and part of the Our Voice Matters group, who promoted participation in the discussion.

“It seems to make sense that it be within easy walking distance of amenities and commercial/health services.  The proposed site offers none of those.  Traffic in the mornings and evenings is a nightmare, and the spot is very poorly served by public transit.”

Other’s took issue that a leadership team of 11 people at the church would decide to change the neighbourhood without consultation from others nearby.

Unionville Presbyterian Minister Marty Molengraaf, explained that it wasn’t lack of respect for the community that drove the desire to investigate this project, it was about “loving and caring for our neighbours and we begin, as Christians, that loving for those that are most vulnerable…we recognize those as seniors.”

But Molengraaf, in a conversation after the meeting clarified that so far as the church is concerned the project discussion has “always been in the form of a question, Is there something we can do here?”  He stresses there was never any predetermined size or number of units on the nearly two-acre site. Nor was there a predetermination of who would be invited to live there.

Molengraaf allows, that it is maybe the lack of a clearly articulated vision that has allowed rumours and fears to cloud the discussion.  “I understand their concerns…but that is what the feasibility study is for,” he says noting the study would suggest what is appropriate.

Both the church and politicians agreed that in addition to a feasibility study that would include feedback from residents, a stakeholders’ group would be formed to guide discussion.

Deputy Mayor Don Hamilton stressed patience saying, “there have been all kinds of rumours going on since the election and I want you to know that nothing has been decided. There is a process to be followed and rules to follow.”

Ward 3 Councillor Reid McAlpine added, “there is still a long way to go for the church to explore appropriate changes to the use of their site, if any. That exploration must involve a respectful conversation among all the stakeholders. I look forward to helping to facilitate that conversation via a stakeholder’s group, including community representatives”.