In the first holiday season following the legalization of cannabis, York Regional Police (YRP) has launched an enhanced festive season RIDE campaign in conjunction with MADD Canada’s Project Red Ribbon. Officers will be out every day and night from now through to New Year’s Day conducting RIDE spot checks and watching for suspected impaired drivers.

The number of impaired-related criminal driving charges continues to rise. So far this year, police have laid 1,210 charges. That’s up from 1,172 charges laid at this time last year. Five fatal collisions in which alcohol or drugs are considered contributing factors have occurred in York Region this year.

Most impaired driving charges are related to alcohol but 10 charges of impaired driving by drug have been laid since the legalization of cannabis on Oct. 17 and YRP is concerned that number will increase. Impaired driving remains the number one criminal cause of death in Canada and, according to MADD Canada, every day, on average, up to four Canadians are killed in alcohol and/or drug-related motor vehicle collisions and hundreds more are injured. 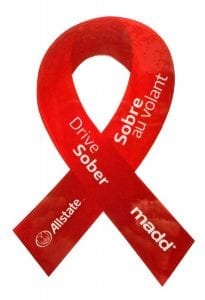 “With parties and celebrations plentiful, the risk for impaired driving is especially high,” says the organization’s website. “Our red ribbon is a small but powerful symbol of the wearer’s commitment to sober driving.”

MADD Canada chapters and community leaders will be distributing millions of ribbons to wear and display through the holiday season as a reminder to never drive impaired or ride with an impaired driver and to plan ahead if you’re going to be drinking or consuming cannabis or other drugs. Call an Uber or a cab, arrange a designated driver, take public transit or stay the night.

Both MADD Canada and YRP urge you to call 911 if you see a driver you suspect is impaired. Police consider such incidents life-threatening crimes in progress and will respond to those calls.

Throughout the RIDE campaign, officers will also be giving drivers a card featuring the Not One More campaign, as a result of the devastating collision that claimed the lives of the Neville-Lake children and their grandfather in September 2015. The awareness cards feature artwork done by friends of the Neville-Lake family and are a reminder of the far-reaching impact that impaired driving can have, not only on the families involved but on the community as a whole.

The legal consequences of an impaired driving charge can include roadside vehicle impoundment and automatic driver’s license suspension, as well as further consequences imposed by the courts, including longer licence suspensions, large fines and, in some cases, jail time.