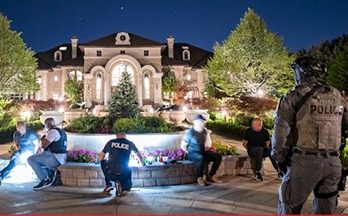 Police have seized a sprawling $9-million mansion, along with 11 firearms with ammunition, more than $1 million in cash, gaming machines and tables, as well as more than $1.5 million in alcohol as part of an ongoing investigation into illegal gaming crime.

York Regional Police chronicled details of the investigation – dubbed ‘Project Endgame’ – at a news conference in front of the gates of the 20,000-square-foot residential property at 5 Decourcy Ct. in Markham on Wednesday. The residential property is alleged to have been operating as an illegal casino and spa that attracted hundreds of customers over several months.

YRP launched an investigation into illegal gaming dens in May after receiving information identifying underground casinos scattered through Markham. They first executed a search warrant at a commercial unit at 3276 Midland Ave. on July 3, seizing gaming tables, video slot machines and more than $20,000 in cash, and arresting five people.

On July 23, YRP descended on the Decourcy Court residence with help of tactical teams from the Ontario Provincial Police and Durham Regional Police Service. They discovered what they describe as a “fully-functioning casino operation” and arrested 32 people, including the owner/operator of the property.

The investigation didn’t end there. Exactly one week later, on July 30, investigators executed a search warrant at a residence on Woodland Acres in Vaughan. Three people were arrested and more than $70,000 in cash was seized along with documentary evidence relevant to the illegal gaming operations.

In total, 45 people have been arrested, 29 of whom have been charged with more than 70 criminal offences. “While the total value of these seizures is significant, this is only the start of our efforts to dismantle organized crime groups who are operating illegal gaming operations in York Region,” says YRP Chief Jim MacSween.

“The money moving through these underground casinos leads to huge profits for criminals that fund other ventures such as prostitution and drug trafficking. This illegal high-stakes gambling also leads to gun violence, armed robberies, kidnappings, extortion and other serious violent offences within our community. We will continue to target organized crime in York Region and use every tool at our disposal, including forensic accounting, to ensure these criminals are held accountable.”

See the list of people charged and the charges they face at www.yrp.ca/en/crime-prevention/Project-Endgame.asp. Anyone with information is asked to contact the Guns, Gangs and Drug Enforcement Unit at 1-866-876-5423, ext. 7817. Or, call Crime Stoppers at 1-800-222-tips or leave an anonymous tip online at www.1800222tips.com.

Police say this 20,000-square-foot estate in Markham was the site of a massive underground gambling operation. Photos courtesy of York Regional Police.

The province is investing $410,000 in surveillance technology to help Peel Regional Police deter aggressive driving and gun and gang