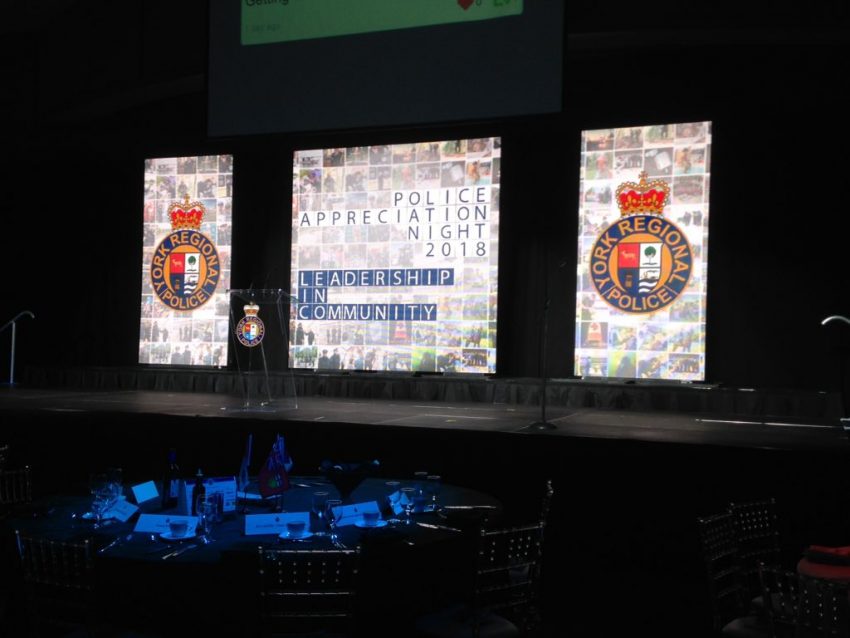 A York Regional Police officer who rescued a distraught young person who had thrown himself onto the CN tracks with a train was approaching was among York Regional Police’s Annual Police Appreciation Night Awards recipients. More than 1,000 people attended the May 16 ceremony.

“He kept saying, ‘I want to die, I want to die,'” said Sergeant James Ward, recipient of the Garrett Styles Bravery in the Line of Duty Award, in a video. “I was telling him, ‘No! You have so much to live for my friend…I don’t want you to get hurt. We care about you.”

Ward had been on regular patrol when he responded to a call about a young person who tried to jump in front of a truck before racing onto the train tracks north of Steeles Avenue on Ninth Line.

“When we meet with people, we usually meet up with them on probably one of the worst days of their lives,” said Ward. “That’s why we’re there. We’re there to help them. We genuinely do care about trying to get these people through whatever they’re going through that day.”

He was quick to credit those who provided the young person with support afterwards.

“All I did was get him off the train tracks.”

Award-winning personnel included those demonstrating investigative excellence and diligence, selflessly giving of their time and talent to better our community, and supporting tomorrow’s leaders and those who have saved lives.

Stacey Diamond, an employee who made her mark as a special events volunteer long before being hired as a report validator in 2013, received the Leo McArthur Civilian Recognition Award. An avid supporter of Special Olympics Ontario, she was honoured for making a difference in the lives of athletes, along with a long list of other volunteer work. “She is very humble,” says information management manager, Leslie Nguyen in a series of videos featuring the stories of the York Regional Police. “She does give and give and give and certainly doesn’t look for anything in return.”

Since its inception, Police Appreciation Night has raised more than $2.7 million to support police programs and equipment benefiting the community. This year, the crowd was entertained by Police Chief for a Day Jin, Zhou, a Grade 5 student from Henderson Avenue Public School in Thornhill. He’s featured in the Chief of Police for a Day video.