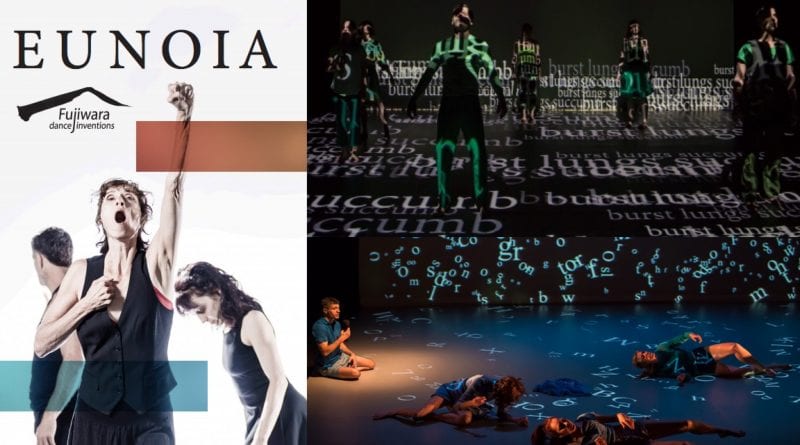 Choreographed dancing as an art form dates back, as best we can deduce, to about 3300 BCE. Throughout history it has enjoyed periods of great popularity among audiences and other times less so. Currently, dance is commonly part of other types of popular artistic expression such as musical theatre, while being less popular as a genre unto itself.

Whether this is fair or not, dance professionals are looking for new and innovative ways to connect with potential audiences and expand the reach of their creations. With Eunoia, director and choreographer Denise Fujiwara may have done just this.

“It’s really something that anyone can feel a part of and really enjoy,” says Adina Herling, Fujiwara Dance Inventions’ general manager. “I’ve known people who have never seen dance before who come out of this show loving it.”

Eunoia is the shortest English word to contain all five vowels and it also happens to mean ‘beautiful thinking’. Christian Bök’s Eunoia is a conceptual poem built on the notion of constraining language to one vowel per chapter. His intent was to prove that each vowel has its own personality and demonstrates the flexibility of the English language.

Inspired by Bok’s work, Fujiwara, herself one of Canada’s most diverse dance professionals for more than four decades, has created a work that applies similar constraints to each artistic choice. As these choices play out on stage, the audience is invited to discover them too. The intent is to immerse the audience in the understanding of the piece.

“She’s created a dance theatre piece,” explains Herling. “There’s dance, there’s spoken text, there’s visuals, and even live sound that embeds the poem’s constraints in its storytelling. The audience starts to play along after the whole thing starts with a game of hangman enacted for their benefit.”

The show features six performers, supported by two understudies, who carry the piece through five chapters of physical storytelling, each inspired by one of our language’s vowels. The show’s presentation is further aided by projections and live sounds being manipulated offstage.

“The audience gets directly involved in the performance too,” said Herling. “No one is forced or anything, but each audience so far has not been able to contain themselves.”

The piece had its world premiere in 2014, as part of the Harbourfront World Stage Series. After that, the show toured across Canada from St John’s Newfoundland to The Yukon. Then, in a rare move for a dance show, Eunoia ran for a second sold-out series of shows in Toronto due to popular demand.

The show’s stop in Markham is of special significance to Herling. As a Markham native, she studied dance at Unionville High School’s ArtsYork program and performed many times on the Markham Theatre stage as a young performer. Bringing this show to Markham is something of a homecoming for her.

“It’s really cool, really great,” says Herling. “It’s great to be back. I’m inviting everybody I know and it’s really kind of special.”