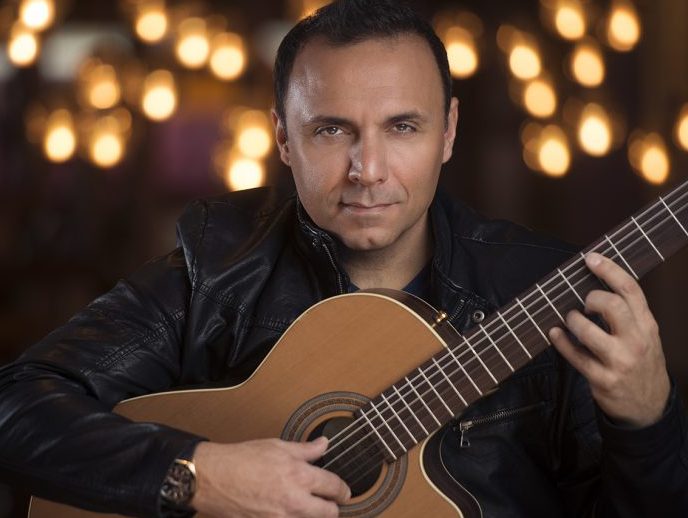 From the moment Pavlo was born, June 29, 1969, it seems the stars would line up to fall where he might wish.  Pavlo was named after his grandfather. “Pavlo” is the Greek version of the name, “Paul”, and ironically, Pavlo was born on the very day of “St. Paul”. Being of Greek heritage, this was also Pavlo’s “name day”. His family always said he was “lucky”. To make things even more interesting, St. Paul happens to be the patron saint of musicians.

Since the time the guitar topped Pavlo’s Christmas wish list at the age of five, he believed he was meant to entertain the entire world. By the age of twelve, Pavlo had composed his first song, and by thirteen, he would throw himself onstage and in front of any audience that would listen.

As a teenager, Pavlo would play in several rock and roll bands, and as their venues would be alcohol serving bars and clubs, Pavlo would perform, with a signed permission slip from his parents. At the same time, Pavlo would achieve honour roll in school, and then enthusiastically study flamenco guitar, classical guitar and the art of song writing.

In his early twenties, Pavlo would continue playing in rock bands; he worked odd jobs; finished university; studied entertainment law, and on the weekends, he would have fun playing with a Greek wedding band.

It was during a vacation in Santorini, Greece that a melody came to him. Pavlo picked up his guitar and wrote the song that would spark what became Pavlo’s very own distinct style. “It was like a light came on”, he remembers. It was a song that was Greek inspired, and the melody made him happy, much like the way he felt growing up in a celebrative household. “It felt like home.” In that moment, Pavlo realized doing what he loved meant celebrating who he was. He baptized his new genre of music as his own “Mediterranean” music – a blend of Greek, flamenco, Latin, and even Balkan flavours, wrapped in contemporary pop.  That song was entitled, “Santorini Sunset”.

As with every venture Pavlo pursued, his family became his first supporters. His mother would make and prepare his onstage outfits. His sister would stand at the CD table and sell his albums. His father would watch every performance, and go over it later – critiquing every note. George, Pavlo’s father, would always keep him at the top of his game, and as an entrepreneur, Pavlo’s father would inspire Pavlo to diligently move forward.

His music has taken him all around the world. Along the way, he’s performed for royalty in the likes of Prince Charles and worked and toured with artists such as José Feliciano, Jon Secada, Olivia Newton-John and The Tenors.

It has never been more convincing, Pavlo is a TRUE WORLD artist, and has become famous for bringing every audience to their feet. Pavlo is currently on tour promoting his second PBS special “Live in Kastoria” Greece and is still driven by his father’s famous words:

“Have the courage to do what you love and the drive to do it well.”