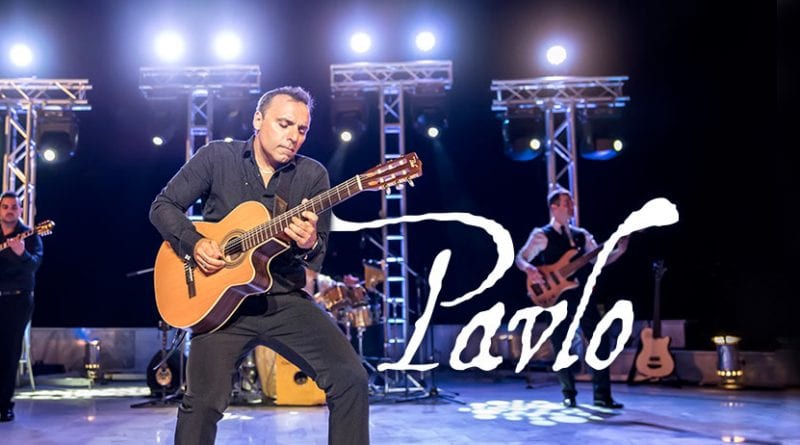 He was told that his music wouldn’t appeal to a large audience. He was told that he would never sell thousands of tickets to hear it performed. And, he was also told that no one would ever be interested in his music being performed on television. The world should stop betting against Pavlo Simtikidis.

Now, 15 successful albums, 4 TV specials (and another on the way), and annual tours of three continents later, it’s time for people to believe in Pavlo’s dream.

“I’ll tell you something; I only ever wanted to play music for people,” says Pavlo. “I had a dream to do it, but I never thought I’d have the career I do.”

The guitarist performs at the Flato Markham Theatre, this time backed by an entire orchestra.

“Playing in Markham is always special for me,” says Pavlo. “It’s near my home, but it’s always a second home to me. I’ve played the whole world but that theatre feels just right to me.”

Pavlo’s dream had its beginning at age 10 with a visit to his cousin’s house in Toronto. His cousin taught him to bang out the main riff from The Beatles’ Daytripper and that was that. The next few years were a blur of learning everything he could about the instrument, writing his first song, staging his first concert at his elementary school, and even starting a Rush cover band.

“I played what we were listening to, but Rush was special,” says Pavlo. “Rush was musically brilliant but they, more than any other group in pop at the time, had a unique sound that they owned. That stuck with me.”

Then, during a summer spent in Greece, implementing the folk styles of his heritage into his technique, he wrote a composition called Santorini Sunset that featured the bouzouki.

“That’s the moment I discovered my sound,” says Pavlo.

Of course, discovering his unique voice led to having to prove its worth. His self-titled 1998 debut album was rejected by every record label he approached, so, he simply formed his own, Hejaz Entertainment label.

Without the support of a major label, Pavlo set out to build his own audience two ears at a time, performing at craft shows, malls, cafés and even an RV park, where only 11 people attended. Pavlo would not be discouraged.

“They were 11 people who wanted to be there,” he states. “They would tell their friends and the next time I played there would be 100 people, then 200. Word of mouth has always been my most eﬀective promotional tool.”

His determination paid off. Pavlo and his sophomore album Fantasia both struck gold in Canada and earned a Juno Award nomination for Instrumental Album of the Year.

“This was wonderful, but it was TV that changed the game for me,” says Pavlo.

In 2008, Detroit Public Television introduced Pavlo to the world of PBS. Pavlo secured the services of 10-time Emmy winner George Veras, responsible for several Yanni specials, including Live At The Acropolis, to direct Pavlo’s ﬁrst 60-minute concert special, Mediterranean Nights. As a result, Pavlo’s original material reached millions of new fans internationally via PBS, Bravo and the CBC in Canada.

Now, more than 20 years into a career that sees him play 150 shows a year around the entire world, Pavlo has no interest in slowing down. This current tour is his most ambitious yet. Based on his most recent PBS special, Pavlo’s music has been arranged for a symphony.

“Playing with an orchestra is magical for me,” says Pavlo. “To hear this music I thought up coming out as this huge sound with cellos and oboes is an out of body experience. I cannot wait!”

The Markham show is extra special because the conductor from the TV special is flying up to reunite with Pavlo and conduct the orchestra that night.

“It’s going to be amazing! It brings another level to my music.”

Next up for Pavlo is the shooting of his next TV special. Which, of course, is no simple or usual affair.

“I’m going to be the first western musician to bring a whole show to the island of Santorini,” explains Pavlo. “On June 19th and 20th we’re shooting on a converted helipad that overlooks one of the most incredible vacation destinations out there.”

Pavlo’s dream started in his cousin’s bedroom and has taken him around the world. When asked how he’s pulled this off, he doesn’t hesitate for a second.

“My mission in life; my journey,” says Pavlo, “is just to spread my music to as many people as I can. That’s it. Everything else is just a dream come true.”

Pavlo in Concert takes place this summer at the Flato Markham Theatre. Tickets are available at www.flatomarkhamtheatre.ca

Notice: Due to COVID-19 this performance is postponed until July 19.