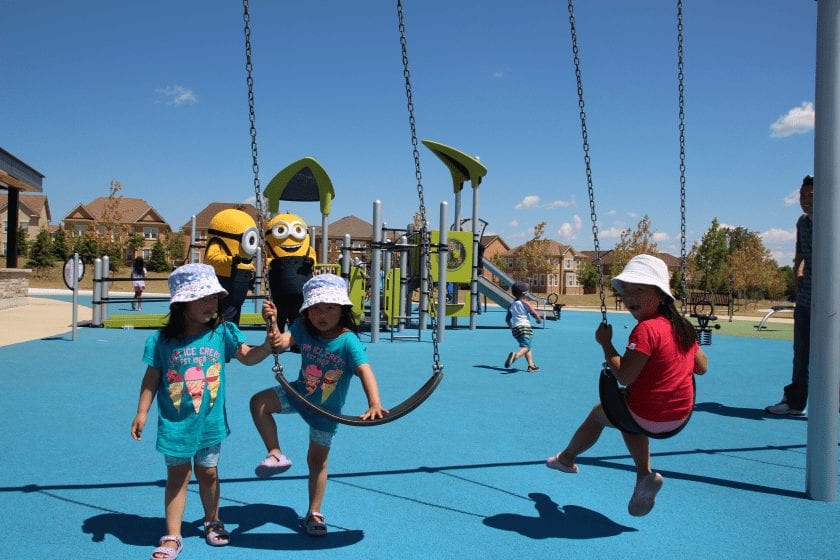 Markham got a little more fun over the summer.

As the city keeps growing, more parks are being added to the landscape, creating opportunities to play and explore in some of the city’s oldest and newest quarters, many paying tribute to Markham’s rich history.

Outside Thornhill’s historic Village Library, a leafy garden now recognizes the contributions to the community by Richard Jarrell. Jarrell, who passed away in 2013, was a significant member and former president of the Thornhill Garden and Horticultural Society. The garden pays tribute to the volunteerism of the recipient Ontario Volunteer Service Award and Ontario Heritage Conservation Award.

The newest parks in Thornhill, at the World on Yonge development, look back to some of the community’s most historic residents. Three new public spaces there received their official openings in July.

The Group of Seven’s connection to the area is already commemorated in the Thoreau MacDonald House on Vaughan’s side of Yonge St. but Markham’s new Arthur Lismer Park recalls the famous painter who came to paint the landscapes alongside JEH MacDonald and other colleagues in then-rural Thornhill. Lismer came north from Toronto, living on John St. in the 1920s.

Finally, Sir Robertson Watson-Watt Park memorializes one of the best-known immigrants to settle in the community. The Scottish-born scientist developed radar in the years leading up to the Second World War.  After the war, he emigrated to Canada, settling for a time in a house on Church Lane.

Descendants of all three esteemed residents came out to the opening of the parks and new plaques tell their forebears’ stories. Two of the new parks provide greenspaces within the condominium and retail complex’s courtyard while the third houses a playground along Meadowview Dr.

One of the first woman doctors in Ontario, and the first female medical officer in York County, Innis MacDonald, was born in Markham in 1902. After attending school abroad, she returned home to become Medical Officer of Health in Markham Village and operated her own practice on Main St. N. until retiring at the age of 75. And all this despite contracting polio, requiring her to use a wheelchair for most of her life.

Her historic contributions were recognized with the official naming of a new park on Fred McLaren Dr., heralded by Town Crier John Webster.

Victoria Square’s new Frisby Park recalls founders of the community. In addition to farming along the west side of Woodbine Avenue, where the Cathedral of the Transfiguration now stands, William Frisby operated a blacksmith shop within the same building as the Victoria Square Wesleyan Methodist Church.

The new park includes a large picnic gazebo and an extensive playground.

Even though summer will soon draw to a close, more new parks will open before the year is out. Among those set to open in September and October are Lloyd Robertson Park, in Cornell, South Unionville Park and Vinegar Hill Parkette.