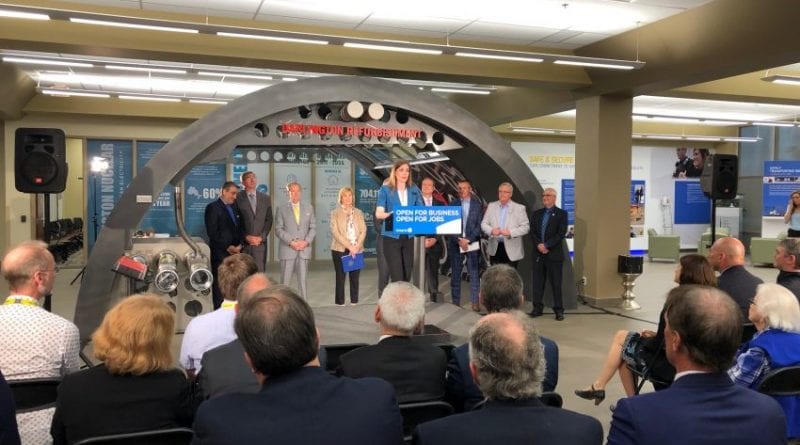 Ontario Power Generation (OPG) is establishing a new corporate headquarters on a campus setting in the Municipality of Clarington. The new campus will include the existing Darlington Energy Complex located just south of Highway 401 and a new building to be constructed on adjacent land presently owned by OPG.

“This is an exciting opportunity for OPG to create a high-tech energy hub that promotes innovation and collaboration across the organization and with our partners and suppliers,” said Ken Hartwick, OPG president and CEO. “This new campus will also help OPG reduce its real estate footprint and reduce the use of commercial leased space thus reducing costs that will benefit the Ontario ratepayers.”

All of OPG’s non-station-based positions in Toronto, Niagara and Durham region will be located in this new campus, which is expected to be completed in 2024 and bring over 2,000 jobs.

The move is expected to save OPG more than $10 million per year in real estate costs. Construction of the new campus is expected to begin in 2020/2021.

The new campus will be built on an existing OPG site, next to the Darlington Energy Complex. It will house OPG’s corporate headquarters, as well as renewable generation and nuclear staff.

“OPG’s plan aligns with our government’s focus to provide real value for money,” said Bethlenfalvy. “OPG’s move to consolidate its operations in Clarington is also a natural fit. It has been safely operating here for 30 years and has become one of our region’s strongest, most long-standing partners.”

By consolidating existing facilities, OPG is anticipated to save approximately 50 per cent on annual lease costs.

Power generated by OPG meets about half of Ontario’s electricity needs.

Main photo: MPP Lindsay Park shows her excitement as OPG announces the plan for a Clarington corporate campus which is scheduled to be built by 2024.