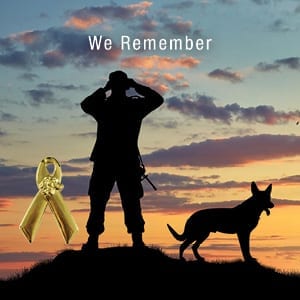 As Canadians come together on Remembrance Day to honour those who have served their country, the wartime contributions of animals will also be recognized through a new commemorative pin unveiled by the Ontario SPCA.

The Animals in War pin is designed to be worn alongside your poppy to remember our veterans and the animals who bravely served by their side. This year’s commemorative pin will feature a dog. For each pin sold, one dollar will be donated to the Royal Canadian Legion, in support of veterans.

The Animals in War pin concept was launched in 2017, with the inaugural design featuring a horse. The Ontario SPCA donated $2,500 to the Royal Canadian Legion branch at Stouffville from the sales of last year’s pin.

“The Animals in War pin was created to serve as a reminder of the wartime contributions of animals, while also supporting our veterans,” says Daryl Vaillancourt, Ontario SPCA humane programs and community outreach senior director. “We invite Canadians to wear it with pride as they don their poppy this Remembrance Day.”

The Ontario SPCA will also be sending officers to Ottawa to place a wreath during the national Remembrance Day ceremony on Nov. 11, marking the third time they have taken part.

“We are honoured to be participating in this service to reflect on the veterans and animals who have served this country,” said Vaillancourt. “The Society will always remember their sacrifices and bravery.”